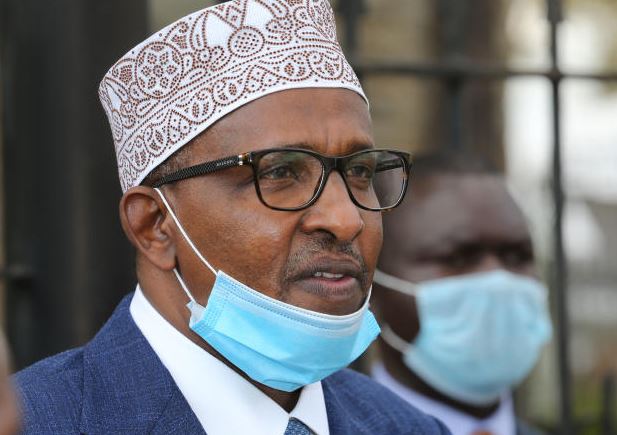 The leadership changes at Jubilee Party enter a critical week as opposition leader Raila Odinga casts his net wider to shape the final contours of the Building Bridges Initiative (BBI).

On the day Deputy President William Ruto ally and National Assembly Majority Leader Aden Duale (above) was walking a tightrope, Raila retreated to Cotu leader Francis Atwoli’s Kajiado home for a roast-meat chat, said to have focused on the BBI.

He was accompanied by Senate Minority Leader James Orengo and National Assembly Minority Whip Junet Mohamed in the private meeting.

“It’s just a nyama affair, nothing much,” a source privy to yesterday’s meeting told The Standard.

The BBI is a gateway to constitutional reforms, which have been supported by President Uhuru Kenyatta and Raila after their handshake in 2018. The two are pushing for an inclusive government to avoid repeated conflicts that accompany every election cycle.

Before Covid-19 struck, Raila, Atwoli and their allies had held meetings across the country to popularise the BBI’s proposals.

Now, with the revelation that the pandemic will be here for long, the constitution reform proponents are meeting again to chart the way forward.

Raila-Atwoli meet comes a day before the BBI team retreats today to write its final report before its term elapses at the end of this month.

Separately, Jubilee Vice Chairman David Murathe confirmed yesterday that the party would not hesitate to kick out Duale as majority leader if a critical mass of party MPs sign up to his ouster.

At the same time, the seven-day period given to 16 committee chairpersons and vices who face ouster from their positions lapses on Thursday, when they are required to have responded to the move by the party to de-whip them.

“If we are convinced there are strong grounds then we will write to the Speaker and effect the required changes. If the majority of the MPs would sign the petition then it means that as the majority leader, Duale has lost the confidence of his troops, and it would only be fair that the party acts in some way,” said Murathe.

He said while he had heard of the collection of signatures, they had not received the list at the Jubilee headquarters.

Murathe, a close ally of President Kenyatta, said once done they will meet and consider the merits of the petitions.

Duale was saved the chop last week but his reprieve was short-lived. Almost immediately after the State House Parliamentary Group meeting, Kieni MP Kanini Kega started collecting signatures to force the Garissa Township MP out of office, through a petition of the majority of party legislators having no confidence in him.

On Thursday last week, Kega said he had more than the threshold required to oust Duale, claiming 120 MPs had signed the petition. He said he planned to hand over the list to the party by the weekend.

“It is the leadership of the party that will then make a decision if they are convinced that they need to make the changes. We are not saying that he must be removed. If the party feels that our petition is not merited, then they will retain him,” said Kega.

Murathe’s assertion came even as a high-placed source at the party revealed the dilemma it was facing on who would replace Duale – who in the past seven years has been the face of Jubilee in Parliament – and command the respect of MPs.

The source, who declined to be named, saying “the matter has not yet reached that stage”, said the possible replacement would only be from North Eastern region.

“That would only mean that we look for a replacement from North Eastern. But the headache we have is who? We would need someone who can command the respect of the House.”

Duale has dismissed the move by Kega, arguing that the removal of the majority leader, as stipulated in Standing Orders 19 of the National Assembly, did not require collection of signatures.

“Standing Order 19 is very clear on the process of removal of the majority leader. There is no place for collection of signatures, and being a second term Member of Parliament, he knows the rules and procedures. The process of changing the leadership was already completed at the Parliamentary Group meeting, chaired by the President and which he attended,” said Duale.

And as Raila devoured goat ribs in Kajiado, Mudavadi, Wetang’ula and Kiminini MP Chris Wamalwa were also meeting in Nairobi, taking stock of their losses.

Justice Ogola declared the title held by the two traders as illegal and that any other claim they had to the disputed land was of no legal effect.

By Special Correspondent | 11 days ago

By Allan Mungai and Boniface Mithika | 19 days ago