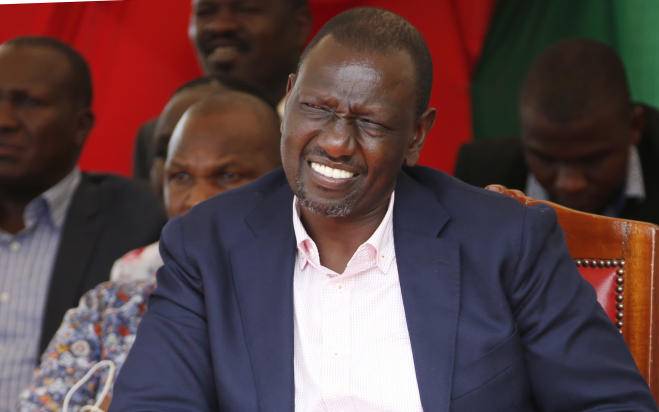 With his politically dishevelled troops looking up for a sign, Deputy President William Ruto has taken cover from the shelling visited on him by the combined power of President Uhuru Kenyatta and opposition leader Raila Odinga.

In what his allies call “tactical retreat”, Ruto (above) has reportedly taken solace in the 22nd law of power which warns against battling for honours sake when one is obviously in a weaker position.

According to this school of thought, he has surrendered to get time to recover when Kenyatta’s fighting power wanes and he loses interest.

In the last two public appearances of the pair, Ruto has displayed zero fighting power, forcing some in his line to question his political courage.

Still, a different school of thought avers that given that the “system” is unlikely to wane in its power battle, Ruto is politically vanquished, has run out of options and is simply trudging along.

“They have taken cover to allow effects of the purge to sink in slowly, granted that loss of political seats in the Senate and National Assembly hit their very hearts, denying them the clout that comes with such positions, ability to influence policy and of course the monetary benefits,” James Mithika, political commentator, says of Ruto allies.

In Rift Valley, the hotbed of DP support, political activity has cooled as strategists go back to the drawing board.

“Our support for the Deputy President is intact. We have taken a retreat to support President Uhuru’s legacy,” Mr Ngunjiri, a fierce Ruto defender, told The Standard.

Murkomen, Ngunjiri, Sudi and Kositany have since 2013 been in constant touch with the DP and this perception of their closeness with Ruto has elevated them to who they are today in Kenya’s political arena.

Before the events of the last few weeks, they were high flying Jubilee honchos and fierce Ruto defenders in Uhuru’s government.

A number of them christened the Sky Team, used to fly in choppers attending harambees and rallies across the country after the 2013 polls.

Although most of them have been putting on brave faces, some have been quietly grumbling as they sought to mend fences with President Kenyatta through allies.

To dump Ruto, however, would be a tall order. But if the experience of some who have paid the price for Ruto in the past is anything to go by, things may change and a political fallout among his troops could be in the offing.

On Wednesday, former Cabinet Secretary Rashid Echesa was quoted blaming the DP for watching by, without a whiff, as his supporters are cut to the ground.

Echesa was sacked from the Cabinet and arrested over his business dealings.

“The DP is the General. We have been fighting for him. I can’t understand how a General can abandon his troops and remain silent as they are being purged the way they have been in Jubilee Party,” Echesa was quoted saying.

According to North Imenti MP Rahim Dawood, the fallout in Jubilee is likely to get worse in coming days and completely disrupt the President’s agenda in his last two years.

The fall out would also include sharing of the spoils left behind by Ruto’s men among the regions.

Dawood, who is on a middle ground in the Jubilee infighting, says he agreed with the President that politics must take a backseat to enable the remaining two years of his term to fully benefit Kenyans.

Already, there is a feeling that Central Kenya was seeking to “take the whole cake home while other regions had contributed to the success of Jubilee.”

Ms Kihika’s entry into the Senate and elevation to the House majority whip was credited to the DP.

In the run-up to the 2017 General Election, Kihika’s association with business tycoon Sam Mburu, a close associate of the DP, was the magic bullet she required to win the seat.

She put up a flashy, high profile, well-oiled and organised campaign, which she said was sponsored by her family, friends, supporters and well-wishers.

Kihika says she regards the DP as her political mentor, and that although she was de-whipped from the post of Senate Majority Whip, her respect for the President and his deputy is unshaken.

Her next move, it appears, is to fight for the democracy space on the country as she prepares to make a move to unseat Nakuru Governor Lee Kinyanjui in 2022.

“I will be very much around politically speaking and expect more fights for free democratic space as I do my oversight role at the Senate,” she says.

She, however, warns of simmering interference of independent bodies, including political parties, saying this is likely to undo the gains made in building Kenya’s democracy.

“We must ensure democracy flourishes in this country. We are shocked by recent developments in Jubilee and Ford Kenya parties and we must agitate for independence,” she said.

Murkomen, Sudi and Kositany capitalised on Ruto’s International Criminal Court (ICC) case at The Hague to gain prominence in Rift Valley after branding themselves as the DP’s ‘spokespersons’ when he was battling the charges.

They have stuck in Ruto’s camp and are among leaders pushing for the DP’s presidency in 2022.

Murkomen says all is not lost as he has a role to play as a senator for Elgeyo Marakwet. He predicts that succession politics will dominate the next two years of the Jubilee administration.

“It will come in various forms; fight for legislative control, changing the constitution, firing and hiring of CSs and other senior government officials, political arrests, intimidation of judges etc. The boom-time is over. Nothing much. Peace, be still!” he wrote on Twitter.

Political commentator Kobia Ataya says going forward, many of Ruto allies in the region will disappear like mist until next year.

He also thinks that sparing Aden Duale was a logical de-escalation of the Jubilee row.

“The dilemma will remain that on one hand, this region loves the President as its kingpin while on the other hand Dr Ruto is entrenched there in a way,” adds Prof Kobia who warns that it would still be unwise to write off the DP’s head start in the 2022 race.

The importance of bechmarking for HR
Work Life
By Tony Mbaya
26 minutes ago
Why you need to watch your health this cold season
Health
By Dr Alfred Murage
41 minutes ago
Are video games hurting your relationship?
Relationships
By Boniface Mithika
56 minutes ago
How to stop overpacking for trips
Leisure and Travel
By Jayne Rose Gacheri
56 minutes ago
.

By Josphat Thiong’o and Jacob Ngetich 2 hours ago
Premium Who will stop the escalating feud between Uhuru and Ruto?

By Kennedy Gachuhi 2 hours ago
Don't be bribed to vote a certain way, Ruto says