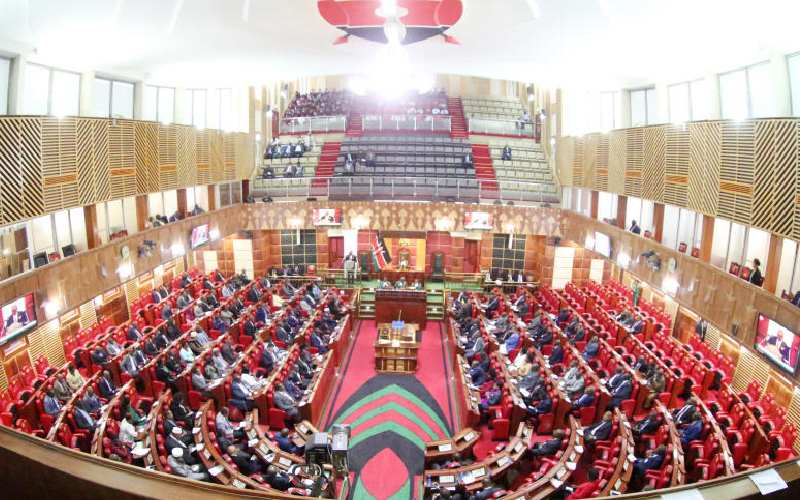 The usually ferocious pro-Deputy President William Ruto camp in Parliament has inexplicably gone quiet after Tuesday’s State House meeting that removed two key allies from the helm of the Senate.

Used to giving immediate statements to counter allies of President Uhuru Kenyatta, the Tangatanga MPs appear to have been unusually silenced by the removal of Senate Majority Leader Kipchumba Murkomen and Majority Chief Whip Susan Kihika.

According to some cautious and more calculating insiders in Tangatanga, things took an unexpected turn when the Senate changes were executed, and members were naturally expected to take a breath and reflect.

But key allies of the president in the Jubilee Party, such as Maore Maoka (Igembe North) and Ngunjiri Wambugu (Nyeri Town), think the Tangatanga crowd has sobered up to reality.

“Very few people can take on the president head to head, and they have now reached the end of the tether with Uhuru having chaired the PG (Parliamentary Group meeting) that removed the rebels from the ranks of Senate. Now they find they cannot attack Jubilee Secretary General Raphael Tuju or Vice Chairman David Murathe and make sense,” said Mr Wambugu.

“They realise that any pronouncements is likely to be taken as a direct affront on the president.”

Mr Maoka, who together with North Imenti’s Rahim Dawood are seen as the only two legislators in the larger Meru region directly supporting the president, said the Tangatanga group had scampered for safety.

Political analyst James Mithika, who is an Igembe Central politician, said after the president’s actions, he expected all Jubilee legislators to toe the line within the next few weeks: “Mark my words, many will not wait for the punitive action to get cracking.”

But a key Tangatanga lieutenant in the region, Kikuyu’s Kimani Ichungwa, who also chairs the powerful parliamentary Budget committee, exuded confidence, saying many like him were not fearful of being clamped down on by the ruling party.

“I did not have a competitor in Kikuyu in 2017. I sailed through unopposed. We as Kikuyu people are not interested in sideshows. We are busy. And we are not afraid of engaging again should need be,” he said.

The president’s allies and Jubilee officials such as Mr Murathe have indicated that the next changes may be at the National Assembly and parliamentary committees. However, what is said to be worrying Tangatanga MPs is that the Uhuru camp may call their bluff and decide to subject a legislator to a recall in similar fashion to what felled former Kiambu Governor Ferdinard Waititu.

“You can’t rule out that they would not pick on one of us by sponsoring a recall motion through the collection of signatures, and the poor legislator would serve as an example to the rest,” said a Tangatanga MP who asked not to be named for fear of reprissal.

Though the threshold for this is high, the Tangatanga crowd is said to be wary of how State muscle, especially the provincial administration, can be used to support such a cause. But some Ruto die-hards, such as Bahati’s Kimani Ngunjiri, said they would not be pushed to follow a cause that is not sanctioned by their constituents.

“The Constitution is also against forcing one to belong to a cause, and my political stand is informed by the Bahati people who voted for me. If these forces running amok with threats of all manner are not interested in fighting coronavirus and helping those marooned in floods ... if they are not interested in reviving the already battered economy and delivering on Big Four ... if their agenda now is to push for recalls, I’m ready for them. Let them bring it on,” he said.

Ndindi Nyoro, the Kiharu MP, said he was waiting to see how the plot unfolds.

“Politics being the art of the possible, I would wish them well in such machinations. Kiharu people are busy putting a meal on the table, keeping off coronavirus and monitoring the floods, and continuing to respect the president and his deputy and the general government that we voted for in 2013 and twice in 2017,” he said.

Mathira’s Rigathi Gachagua, a Tangatanga pointman in the region, dismissed any talk of impending recalls as pure speculation.

“Should such a time and scheme come, we shall refer the case to the Mathira people. I personally am not afraid of the ballot. Not in Mathira. I and Mathira people speak in one tongue. Those threats are hollow,” he said.

“It has reached a point that the president won’t sit back and watch as his bosom support base continues being incited against him by DP Ruto lieutenants in the Mt Kenya region,” she said.

Ms Chege said there have been several meetings between Mt Kenya leaders and the president to strategise on how rapid development would be pushed for the region, “but the DP Ruto brigade in this region would leak the strategies to the media with the intention of making him (president) look tribal.”

She added: “The presidency is national but the president knows he has his roots in politics …. He has all along desired to leave the Mt Kenya region enjoying the benefits of investing in him. But it has been tricky in that he dared not bare himself as having a special agenda for the tribal support base.”

Uhuru’s camp is nevertheless said to be seriously considering their options in the National Assembly where the pro-Ruto camp dominates the Jubilee PG.

In the Mt Kenya region, the Uhuru camp’s best showing is in Murang’a where MPs allied to the president outnumber the pro-Ruto crowd by a small margin.

In Nyeri, the president’s most reliable supporters are Wambugu and Kanini Kega (Kieni), while in Kirinyaga, Laikipia, Nyandarua, Embu, Nakuru and Tharaka-Nithi counties, the entire PG appears allied to the DP.

In Nairobi where Jubilee has nine MPs, the enthusiastic Uhuru allies are Maina Kamanda and Mercy Gakuya (Kasarani), while several others float midstream.

Hope for family of slain scribe as Kabuga is arrested

William Munuhe, a freelance journalist, was murdered on January 14, 2003, the same day he had planned to set up Kabuga for arrest by agents