By Peter Theuri | 10mos ago 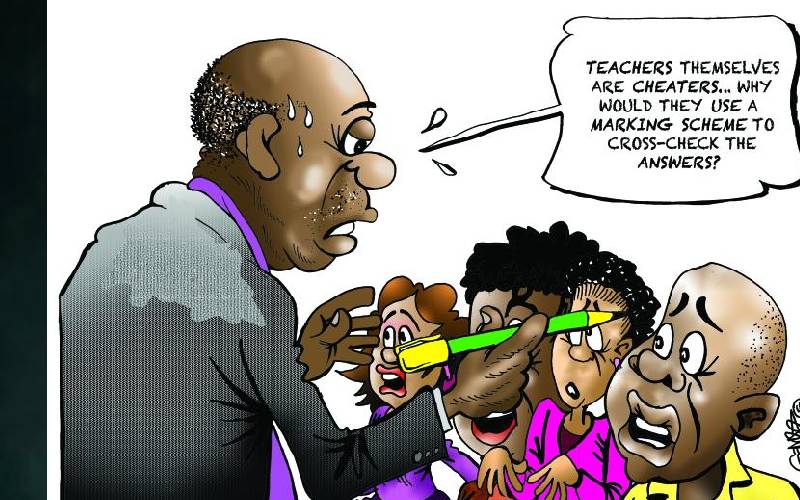 We were appalled that some of the parents calling out the students have faced our Soup-rim Court and Hi-courts countless times to answer to charges of philandering. Harold, who flip flops like no one else I have ever seen, was soon the defence counsel for the cheating students. He argued that teachers themselves are cheaters.

“Why would they use a marking scheme to cross-check the answers? Why should they be using textbooks while marking papers? Peerless cheaters, those!”

Harold, who spent the long part of his youth cheating, and who is confident he will cheat his way into heaven, decided to hold a crusade in which we would speak against cheating in exams and pray it away.

And for the first time in years, Sue showed up for a Harold event. Other important guests such as Clarissa, Paul and yours truly also swaggered into Harold Assemblies of Holy Associates (HAHA).

Dignitaries such as Kinuthia, who make an appearance but do not understand what is happening, arrived last and made their way to the front. Solemn parents sat pensively on the weather-beaten pews, hoping to get a piece of redemption for their wayward sons and daughters.

As a democratic government, we allowed all political contestants present to speak. As the master of ceremony, I spoke the most. Sue was invited to the stage and, with her usual grace, she sauntered forward, straightening her skirt as she approached the altar.

I thought this was how she would have looked walking down that aisle with Harold, had they not disagreed over Valentine’s; tithe money and whether avocado’s slipperiness is what had led to Harold’s backslide into alcohol.

Sue, who has been claiming that the village elections will be rigged in August, took this opportunity to lament the imminent loss.

“You cannot pray away cheating while it is the only way that some of us expect to win the elections,” she said. “And not when they started cheating way before the candidates they are admonishing were born.”

In all truth, without cheating, there is no Harold. This man cheats even at the dinner table and ends up eating all the food. A month ago, he made me show Paul, his 10-year-old son, videos of dragons. When Paul was stiff-scared and could not bring himself to watch another dragon, Harold reached into his bag and pulled out a juicy dragon fruit.

He sliced it into pieces and as Paul watched in horror as Harold squeezed piece after another into his hippopotamus-like mouth.

In defence, when his time came, Harold argued that one should use a thief to catch a thief, in essence admitting that he was a cheater.

One of the parents even brought a bagful of avocados to Harold as her offertory so that my uncle would offer special prayers for her son. Apparently, he had sneaked in her phone to school to play snake xenzia, which is what he had done for most of his four years in high school.

“We pray he is not smoked out because even with the phone he still will not get any grades of note, so he is not disadvantaging anyone,” the mother explained.

We have been here before. Men being prayed for by Harold so they do not get home late in the evening and Sue making sure they get so drunk that they have to get home late.

The actual saboteur is not Harold who himself prayed that he would stop taking alcohol but could not escape Sue’s grip. He cannot cheat his way out of anything anymore.