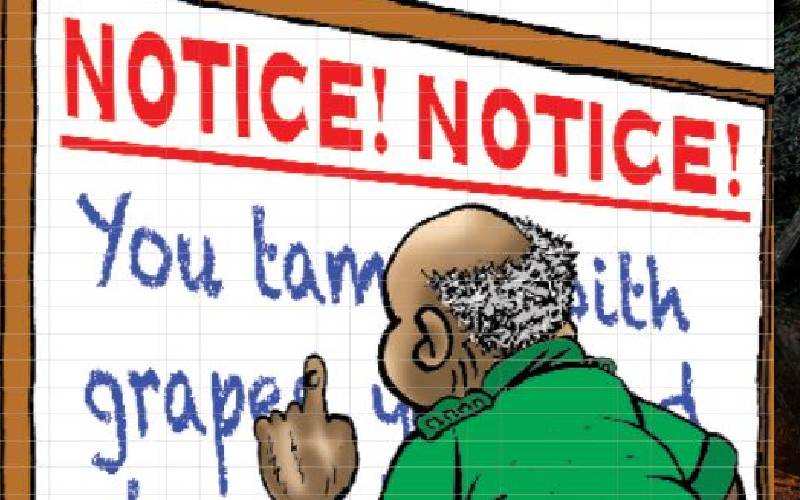 With the only TV in the village in his church, Harold has Gitegi at his mercy. A few people have vehemently opposed his plans to charge a fee for watching TV. His initial thoughts were that people would become more and more part of the church and his offertory bag would swell. That failed to happen.

He suggested that he would allow Sue and her compatriots sell wine outside the church on Saturdays, and half of their profits should come to church. Sue objected.

So Harold turned to his adviser in chief. “You could dictate that everyone that wants to watch should also, in some way, contribute to the well-being of the church,” I started, “because were you not to incur costs to secure the church, the TV would be gone!”

I gave him the idea of starting a church garden where, for only a few minutes a few days of the week, a few members of the village would tend to crops that belonged to the church. If you have followed Harold long enough, then you know that when we say something belongs to the church, we mean it belongs to him.

A church garden was an excellent idea, we agreed. “And Pete,” said the hoarse voice, “there is only one problem. What if the fruit we plant ends up being the forbidden fruit?”

I asked him to go rest. He went to drink.

That next day, it was discovered that someone had tried to gain access into the church but had failed. Harold sent a warning to the villagers.

The following night, the thief made his way into the church, but was unable to carry the TV home. A few screws had been removed and the remote control was missing. So I hired a watchman without alerting Harold, aiming to surprise him after I had the thief arrested.

That evening, when Harold left for the drinking den as usual, I followed him out and went to the church compound where the watchman, Githendu, lay in wait.

Under the biting cold we sat, chatting in whispers, as a sullen moon watched from afar, a few twinkling stars now and then ducking under thin clouds in the sky.

By an hour to midnight, nothing had stirred. I told Githendu, who was falling asleep, that I would go home. Fair deal, Githendu whispered sleepily. We would catch up the following day because… Noise!

We sat upright. Someone was making his way into the church compound. They were finding their way through the barbed-wire fence. We sat on our haunches, plotting an attack.

A safe distance away, we could only make out a faint silhouette of a person against a background of trees.

Within minutes, he had started digging. And, one after the other, the fencing poles dropped behind him.

Then he proceeded to the neighbour’s farm and, working like clockwork, started digging.

“He is moving the fence,” Githendu whispered. He was right.

I wanted to tell him to hold on a little longer; I already had an idea who this criminal was. But it was too late; he raised an alarm. The man who was moving the fence dropped his steel bar and bolted. He tripped twice, and once his pants got caught in the barbed wire.

I told Githendu to collect the tools and go home. I had this covered.

I ran as fast as I could all the way home, not once running into anything, and flew into bed.

Minutes later, I heard Harold panting down the short footpath to the house.

“Who is running after you?” I asked, pretending to have been jolted from sleep.

“Thieves, all the way from the shopping centre.” His pants had been ripped by barbed wire, and he was scared stiff.

I wanted to ask him why he would break into a church whose keys he had, or why he would steal his own TV, but he felt his pockets and, flustered, said: “I need to go to church to pray. Now!”

He had dropped his phone.

One Zone Lockdown’ simply means that nocturnal outing and travel outside of one’s immediate environment have become limited at best, and inaccessible.

By Sunday correspondent | 3 days ago