Who’s up for camping? Not me! 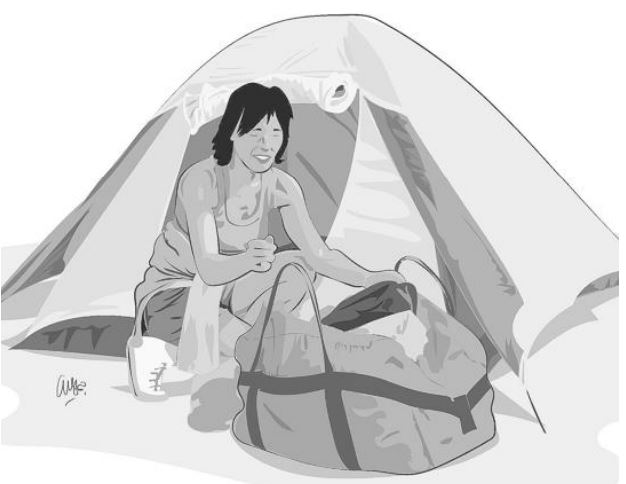 Just when you think you know someone, they unleash information about themselves that leaves you open-mouthed in wonder. This happened to me last week, when a friend revealed that she not only enjoys camping, but is especially excited by activities that provide an adrenaline rush. Like jumping off a cliff into the water way down below, which she has done, or sky-diving, which she is planning to do.

This is one person who is always well-dressed – heels, hair, nails and accessories in place. So as she narrated her various escapades, all I could think was, “Who is this woman?!?” She was busy trying to convince me and two other friends that we should plan a camping weekend but was met with a wall of resistance because when it comes to camping, I have just three words: No thank you.

The closest I have came to sleeping in a tent was several years ago, when I attended a friend’s wedding in a luxury tented camp (key word being luxury). These tents had solid floors and brick walls; only the top half of the walls and the roof were made of actual canvas. There was a real loo and shower with running water, as well as real beds, electricity and, if memory serves me correctly, there was even a real door. I had a very comfortable weekend there and have been planning to go back ever since.

But when I told my friend of my experience of ‘camping’ she laughed out loud and said that was definitely not what she had in mind. The tents she was talking about for our proposed camping trip were the kind that can be folded up and carried in the boot of a car, along with sleeping bags, jerricans of water (for drinking, not having a shower – apparently the latter is a luxury when you’re camping) , matchsticks to light fires…

Lying on the grass

Two TV adverts from a short while ago came to mind. In one, a young woman who is obviously not used to doing things for herself has just received some mobile phone airtime and asks a group of people that is around her: “Nani ataniskrachia??” In the other advert, another young woman contemplates her aunt’s limited culinary skills and concludes: “Ah kent!”

I relate perfectly with these two when it comes to camping, or any other outdoors activities for that matter. That includes lying on the grass to enjoy the sun – before I spread my blanket I always pray that the good Lord would scatter any and every creature that stings, bites, buzzes, crawls, slithers or flies. Even game drives, which are a source of great excitement for my family, fill me with dread as I imagine a wild animal attacking our vehicle.

I’ve watched the videos of lions or elephants or rhinos getting too close for comfort and have vowed that will never be me. That is one of the reasons why, despite our eldest child’s insistence, we have never made it to Ngulia Safari Lodge, where I’m told leopards just hang around in the trees so tourists can take all the close-up photos they want. No thank you.

My friend thinks she might be able to succeed where my sister has failed. Over the years this sibling has tried and tried to get me and our other sisters to join her on hiking, camping and even white-water rafting adventures. She has shared photos of the inside of a tent that looks impossibly cramped but which she swears can accommodate three sleeping adults quite easily. I choose to take her word for it; I have no desire to prove it for myself.

Given a choice between cleaning a house from top to bottom by myself, including washing the dishes, doing the laundry, taking out the trash and cooking on the one hand, and spending one night out in the wild by choice, in a portable tent, on the other hand, the former wins any time. As for the latter – no thank you.