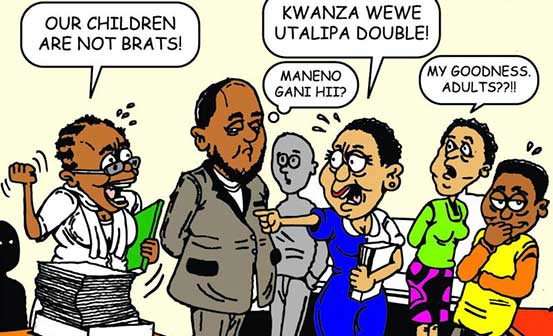 As I drove home from work last Thursday, I came across a small assembly made up of my neighbours at my gate.

One of my neighbours, Mama Dinah, motioned me to stop, and stop I did, and stepped out of the car.

Mama Dinah owns the block of apartments next to ours, and she is rated among the wealthy people in the neighbourhood.

It turned out that a group of boys from the neighbourhood,  including my son Russell, had shattered Mama Dinah’s window-pane while playing football earlier that afternoon.

14-year-old boy who walked 104.4Km to raise fees gets sponsorship

Midwife, 71, ready to join Form One despite low marks

The boys had refused to surrender the culprit who was responsible for the damage, so she had called each of the boys’ parents to come up with a formula of repairing the window pane.

Then in an open display of her wealth, she announced that she had imported her panes from Europe, just in case anyone among us imagined they are like “those cheap local ones.”

The parents were however opposed to Mama Dinah’s terms. Baba Maurice insisted that his son was innocent and demanded that the real culprit be named.

He wanted the culprit’s parent to pay for the damage.

Baba Mutiso also opposed the landlady’s terms, charging that he was sure his son was innocent and so he would not discuss any payment.

He further remarked that the window pane in question did not look imported.

There are too many counterfeits in the country today, he said, so anyone can claim to have imported something from Europe when the item was in fact “imported” from Kariobangi.

This remark only served to put him at loggerheads with the landlady, but I am afraid the ensuing exchange of verbal missiles cannot be published here.

Comically, he found an ally in Baba Salim, whose son claimed to have been the referee, and was therefore not an active player.

At this point, the landlady was so worked up that she looked ready to uproot the nearest railway line.

Salim is a tall and heavily built man, but Mama Dinah’s shrill voice left him cowering, to the point that he actually looked shorter.

To cool things down, Mama Otieno suggested that we should collectively foot the bill. We would then advise our children against being irresponsible.

On my part, I maintained silence. I have stated before that I love peace, a characteristic that I developed after several months of intense bullying in high school.

Thus, in a move consistent with my role as the coward of Nairobi County, I leaned on my pre-historic car’s bonnet and listened.

Just then, the landlady announced that she had run out of patience. “Mkicheza hii mambo nitaipeleka polisi” she announced. One of the parents whispered to me that the case would end in the landlady’s favour, since the police in my area can smell kitu kidogo even from the moon.

But the landlady’s threat only served to rattle some of the parents.

Baba Mutiso said no, you will not rush us here as if we are schoolchildren.

He further bragged that he was capable of hiring a lawyer.

Another parent announced that she would not be intimidated by mere threats of police action, as she, too, had connections.

“Adults should solve their disputes in a mature way, especially on small issues,” I lamented to Mama Jimmy later that evening. “That incident did not have to get ugly.”

“When parents start trading insults public  and threatening to unleash their connections on each other, then you should know we have buried our morals completely.”

And thanks to my son’s involvement in the incident, I owe the landlady a tidy sum, which means the boy can kiss part of his March pocket allowance goodbye.

We must do more to promote growth in pastoralist regions

Political leaders comprising governors, parliamentarians and county assembly speakers from the 14 pastoralist-dominated counties held the second annual leadership summit last week, led by myself as the current president of the summit.