Statements made by two French doctors Camille Locht, head of research at the Inserm Health Research Group and Jean-Paul Mira, head of Intensive Care at Cochin hospital in Paris during a debate on TV channel LCI suggesting conducting of coronavirus trials in Africa, to ascertain if a tuberculosis vaccine would be effective against the disease have sparked an uproar with some people terming the remarks racist.

“If I can be provocative, shouldn't we be doing this study in Africa, where there are no masks, no treatments, no resuscitation?” Jean-Paul Mira asked. “A bit like as it is done elsewhere for some studies on Aids. In prostitutes, we try things because we know that they are highly exposed and that they do not protect themselves,” he added.

Retired Ivorian professional footballer Didier Drogba who used to play for Chelsea was among the first personalities to castigate the sentiments on his twitter handle.

“Do not take African people as human guinea pigs! It’s absolutely disgusting. It is totally inconceivable we keep on cautioning this. Africa isn’t a testing lab. I would like to vividly denounce those demeaning, false and most of all deeply racists’ words. ” Drogba said. 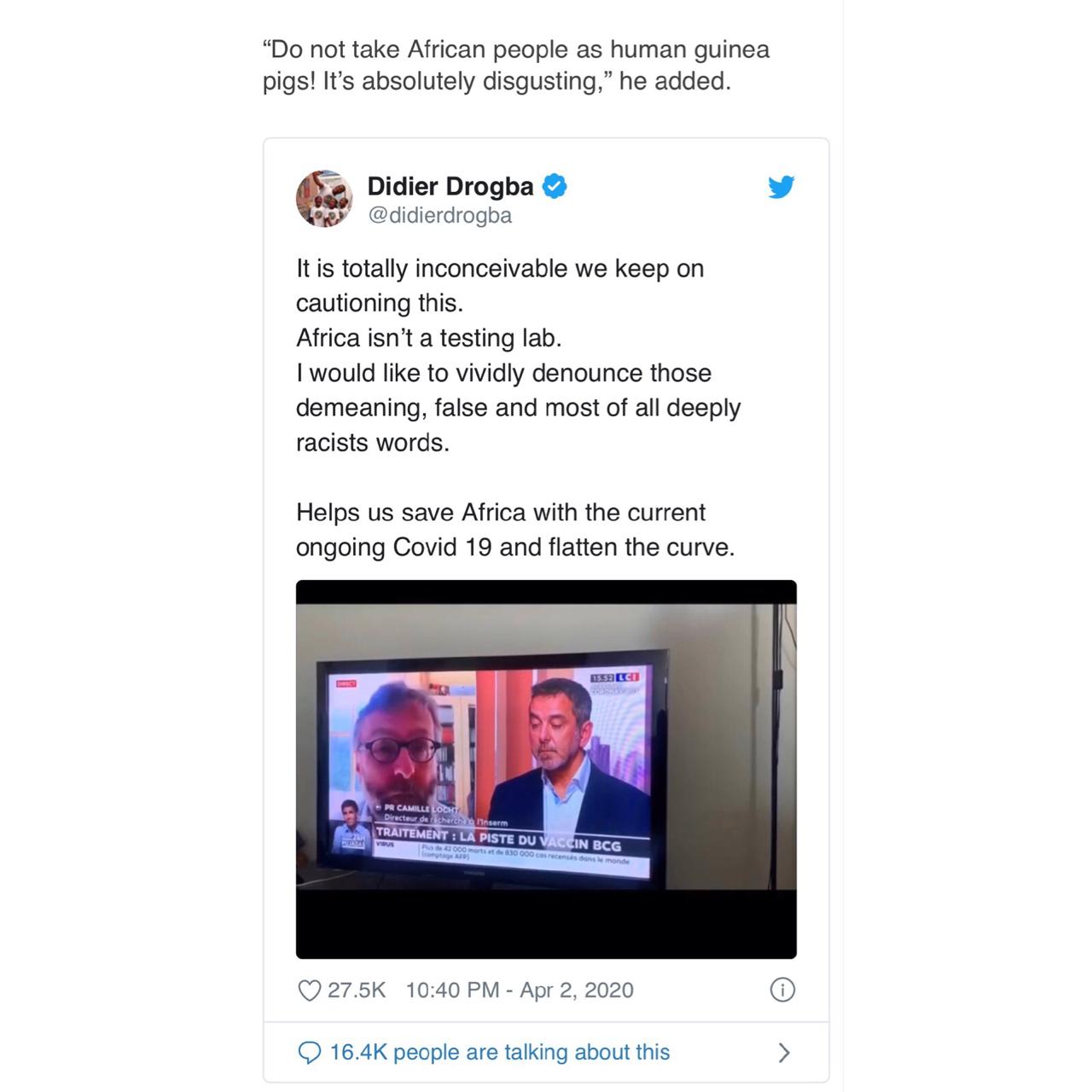 The former striker went on to say that African leaders have a responsibility to protect their populations from those horrendous conspiracies. ” Let us save ourselves from this crazy virus that is plummeting the world economy and ravaging populations health worldwide.” He said.

Dr Mira had doubts whether the study would work as planned on healthcare workers in Europe and Australia because they had access to personal protective equipment to prevent them catching the virus.

In an interview with the Huffington Post, Mira said: "Africa could be even more exposed to serious forms of harm because there will be so few masks and little confinement because of societal structure."

The group went further to issue a statement saying, Africans aren't guinea pigs, adding that comparison with AIDS and prostitutes was unwelcome.

Later Locht's employer, posted a statement with the hashtag #FakeNews, saying remarks by his employee were taken out of context.

"A distorted video, taken from an interview on LCI with one of our researchers about a study on the potential use of the BCG vaccine against COVID-19, is now the subject of erroneous interpretation," the statement quoted.

Drogba’s sentiments were echoed by Demba Ba and retired Cameroonian footballer Samuel Eto’o who both said it was wrong.

At the moment, Africa has the least number of COVID-19 cases with confirmed ones standing at approximately 7,500 and about 320 deaths. Of that Kenya has 126 confirmed cases, 4 deaths and 4 recoveries.

Neymar has donated $1 million to fight the impact of the new coronavirus in his native Brazil, according to TV network SBT.

By Robin Toskin | 2 days ago

By Nathan Ochunge and Micah Sali | 6 days ago

By Kimathi Kamau | 12 days ago