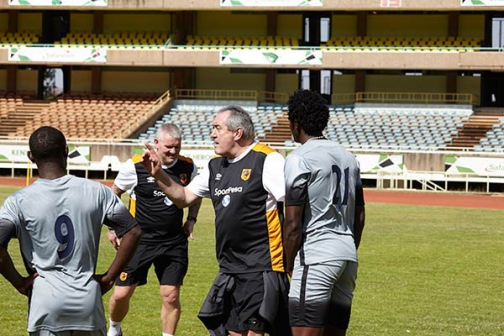 Ball control, possession plays and pitch awareness skills dominated the first week of the ongoing SportPesa All Stars training camp which kicked off on Monday at the Safaricom Stadium in Kasarani.

It was nearly full house for the initial 47-member squad, save for five Gor Mahia players who are yet to report to camp because of an engagement outside the country.

The five are, however, expected to join the camp early next week as they fight for a slot in the final 18-member AllStars team that will travel to the UK next month for a historical friendly match with English Premier League team Hull City.

The match will be played at KCOM Stadium, UK on February 27.

Despite the expected culling which will reduce the number of players at the camp to 30, Hull City’s professional development coach Terry Boyle said he hopes the training camp will be the beginning of good relations between the players and the coaching staff present.

“During the course of this week and next week there is going to be strong friendships as I would have thought between coaching staff and the players,” said Boyle.

AllStars team manager Neville Pudo said Kenya’s football standards are likely to improve immensely and catapult the country to major tournaments if such skill-development and global exposure projects are sustained.

“It is a very big privilege to me and to the country. This is just the beginning and if these kinds of programmes could continue, we will go far as a country,” said Pudo.

The mooted ideas put forward by the FIFA technical director Marco van Basten include the scrapping of the offside rule, more substitutions and swapping yellow cards for sin bins.