Last updated 4 years ago | By AFP 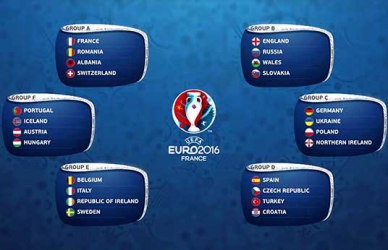 With the European Championship finals first round now over here are five stars who failed to bring the tournament alight in the group games:

Fresh from scoring 50 goals for Paris Saint-Germain in his last season, Zlatan Ibrahimovic looked ready to terrorise opposition defences at the Euros. On the eve of Sweden's first game against the Republic of Ireland, Ibrahimovic -- who has never done modesty -- declared: "The legend can still deliver."

He leaves France - definitively as he heads for an expected Manchester United deal -- having failed in his quest to score at a fourth European Championship finals, Cristiano Ronaldo beat him to the record. He forced the own goal which brought Sweden's equaliser in their opening draw with Ireland but did not manage a single shot on target in that match or in the 1-0 defeat to Italy that followed. It was an inauspicious end to his international career, with Ibrahimovic now retiring from Sweden duty after Wednesday's 1-0 loss to Belgium.

One of the reasons Poland were tipped to do well in France was the presence of Bayern Munich striker Lewandowski at the tip of their attack. But while Adam Nawalka's side qualified for the last 16, it felt like they did so despite their biggest star. Poland scored just two goals in three games but conceded none.

The leading scorer in last season's Bundesliga and the top scorer in Euro qualifying, Lewandowski has not yet found the net in France and the pressure is building on him to perform ahead of Poland's last-16 tie with Switzerland. Despite that, Nawalka is keeping the faith in his captain. "The fact that Lewandowski has not scored a goal yet is not a problem for either me or the team. It is a matter of time, I think he will score in the next game," he said.

Barcelona midfielder Turan's status as an icon in his home country of Turkey meant fans were largely pinning their hopes on him to drive Fatih Terim's team on in France. But after a difficult season at club level, Turan toiled at the Euros struggling to influence games from a position wide on the left. The 29-year-old even had to endure the ignominy of being booed by Turkish fans during the 3-0 defeat to Spain in Nice. "Whatever happens that shouldn't happen," Terim said before Turkey bowed out.

It would be easy to pinpoint Bayern Munich star David Alaba as the biggest disappointment in Austria's awful campaign. However, Dragovic was more responsible than anyone for their early exit. He was meant to be a leading figure in defence for an Austrian side considered dark horses coming into the tournament. The Dynamo Kiev player's tournament has been a disaster. He was sent off in the opening game against Hungary, leaving 10-man Austria to succumb to a crucial 2-0 defeat. In his absence Austria held Portugal to a goalless draw. He returned for their final Group F match against Iceland but missed a first-half penalty, hitting the outside of the post in a 2-1 defeat as they crashed out.

The energy of Paris Saint-Germain midfielder Matuidi is usually vital for France, but he was not at his best as Didier Deschamps' side struggled to find top gear in Group A. He has been Deschamps' most used player since 2012 but there is now a debate in France as to whether Les Bleus would be better off using Moussa Sissoko of Newcastle United. Sissoko showcased his marauding midfield abilities in the 0-0 draw with Switzerland when Matuidi was rested. Sissoko's presence permitted Paul Pogba to play on his preferred left side of the midfield three. Pogba, criticised in France for not living up to the sky-high expectations placed on him, performed better as a result.

Ronaldo levels up with Ibrahimovic in battle of evergreen strikers