The money will help foot the Sh1.7 million pending hospital bill and Sh1 million will go towards funeral expenses.

His uncle Joseph Ayimba, and the family spokesperson, Oscar Osir, said he will be buried in two weeks.

The family has asked for well-wishers to help ease the financial burden.

Ayimba (44) was battling cerebral malaria, which kept him away from the public eye since the start of 2021.

After leaving his brief role as Kenya 15's coach, Ayimba coached the Sevens team between 2006 and 2011, where they secured their first-ever World Series final in 2009 in Adelaide, Australia. In the same year, he led Shujaa to its maiden Rugby World Cup Sevens semi-final in Dubai.

His second stint as Kenya Sevens head coach was between 2015-16, where he coached the team to its first-ever appearance at the 2016 Olympics in Rio de Janeiro, Brazil.

In 2016, Ayimba and the team made history when they won the World Series title after Kenya beat Fiji 30-7 in the 2016 Singapore Sevens final. 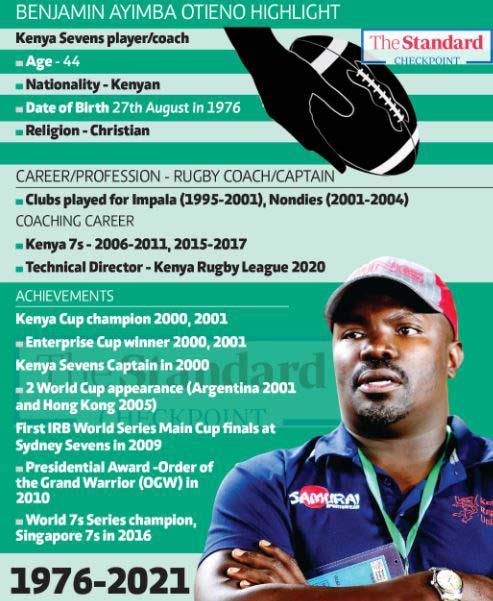 Ayimba will go down in history books as the man who won the 2016 Singapore Sevens after thrashing Fiji 30-7 to bring the coveted cup home. It is no mean feat.

But did you know that Ayimba’s rugby journey reads like that of the biblical Israelites when they left Egypt? Maybe not, as many Kenyans — save for his recent win in Singapore — remember him as a man who was fired as the Sevens coach in 2011.

After completing his studies at Olympic, Ayimba joined Maseno School in Nyanza, where he met a teacher, one Jeam Agutu, the then Deputy Principal at Maseno School.

Ayimba had a polished demeanour and was easy to read.

He had the will and mettle to succeed against odds, traits he had built since his childhood days and later teenage years.

During his days as a player, he had a winning mentality, especially after reaching similar finals in the late 1990s.