Shujaa edge South Africa 2 to bounce back to winning ways

Kenya Sevens bounced back to winning ways with a narrow 19-12 win over South Africa 2 in the Rugby Africa Solidarity Sevens tournament played in Stellenbosch in South Africa on Saturday.

Nelson Oyoo, Harold Anduvate and Derrick Keyoga tries were enough to hand the East African giants their second win of the tournament after previously losing to South Africa 1.

Shujaa lost one match and registered two wins in the two-day event expected to end today after another set of three matches played in the round-robin format.

Shujaa ended the day one tourney on a high note after bouncing back to winning ways with a tight 19-12 win over South Africa 2.

Kenya got off the blocks first after Billy Odhiambo released Nelson Oyoo whose pace proved too much for the South African backline as he raced to the try-box to ground the ball for the opening try that was converted by for a 7-0 lead.

However, Shujaa’s celebrations were cut short after Justin Geduld intercepted a pass from Daniel Taabu to score between the posts as the two teams headed to the break tied at 7-7.

In the closing half, South Africa took a huge step towards winning their second match of the day after landing an unconverted try but Shujaa would pull a comeback to seal their second win of the day.

First, Derrick Keyoga paced himself to the try line after a beautiful offload from Billy Odhiambo to tie the scores at 12-12 before Harold Anduvate danced past his makers to dot between the posts for the win.

Kenya started the two-legged tournament on a high note after thrashing Zimbabwe 24-0 in their opening match of the day. In the second match, Shujaa fell to South Africa 1 27-14.

The Rugby Africa Sevens camp will act as a competitive training camp including two tournament weekends for host South Africa, Uganda, Zimbabwe and Kenya as part of the Tokyo Olympics Preparations.

Kenya will take on Uganda Sevens and South Africa on Sunday at 10.40 am and 12.50pm respectively. 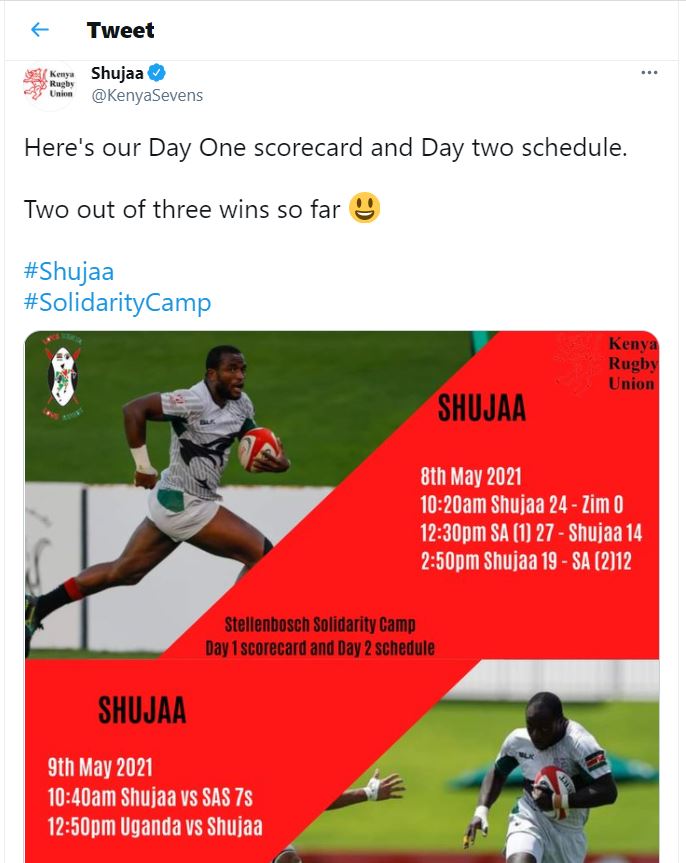 By Rodgers Eshitemi | 14 days ago

By Rodgers Eshitemi | 15 days ago