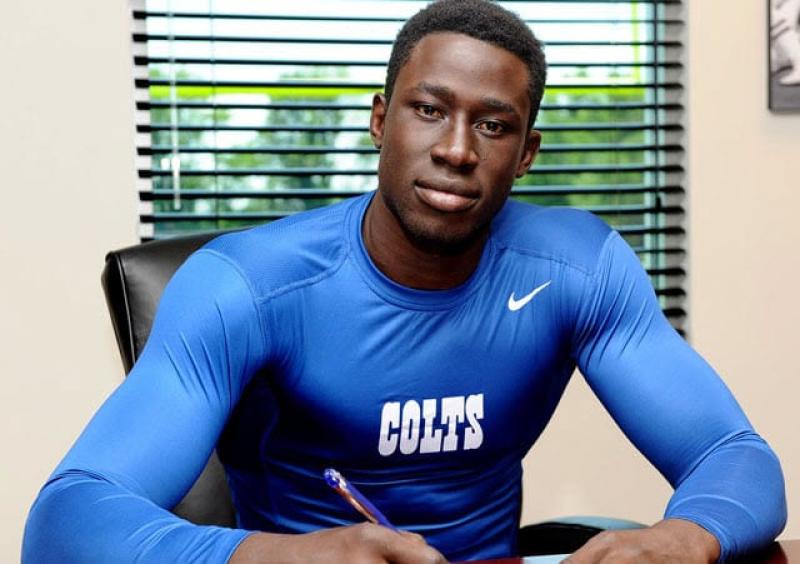 Kenyans yesterday expressed support for former National Football League player Daniel Adongo (pictured) who is going through difficult times in the US. Adongo was once the most decorated and best paid Kenyan sportsman abroad.

Adongo’s current miserable situation is a true, painful story of falling from grace to grass.

Seven years ago (2013), Adongo took the world by storm when he became the first ever Kenyan to play in the USA's NFL, after signing a lucrative deal for Indianapolis Colts at the age of 23, without any American football experience.

But fast forward, Kenyans have joined other rugby and NFL enthusiasts across the globe to express their concerns over the devastating state of the 30-year-old former Kenya national rugby junior team (Under 18/21) winger.

This was after he shared a series of videos on social media, depicting his deteriorated physical condition and well-being.

Even as Kenyans from all walks of life continued to rally behind the depressed Adongo, who appears to have gone into drugs, many have been left wondering when the rain started beating their once most-revered star.

Recalling what Adongo said when he appeared on Jeff Koinange Live show six years ago, his current state reflects what most successful athletes go through during depression.

“Basically, to be successful, you must take yourself away from distractions and an environment that is not conducive to success. You can’t be arguing with people, you can’t be angry and you can’t expose yourself to things that are negative," he said then.

He added that every day is a battle and he would like to be like everyone else, but as a sportsman he had to sacrifice a lot of things to achieve his ultimate goal which was to be great and leave a legacy that would inspire people.

Adongo’s glittering career was brought to a halt in 2015 when he was suspended from the NFL for alleged domestic violence. The Colts followed suit by cancelling his contract and since then Adongo has not been able to play for another club.

Trouble started when the Colts waived Adongo on December 17 after law enforcement personnel received at least two reports of possible domestic violence between the University of Pretoria graduate and an unidentified female.

He then joined Kenya Harlequins before moving to Sharks Rugby Academy in South Africa in 2007, as he competed for the Kenyan Under–18 and Under–21 national teams.

Adongo became the first Kenyan to play in world’s most famous rugby league, Super Rugby in South Africa when he signed for Southern Kings in 2013.

It is during his spell at the Kings that he was spotted by Johnny Gbenda-Charles, a rugby agent based in Hong Kong and recommended to Indianapolis.

On arriving at Indianapolis, Adongo became a big star and achieved great feats. And maybe it is because of this reason that Kenyans on social media have united to support the embattled athlete.

Adongo's former teammates, Kenyans and other sports enthusiasts across the world are confident Adongo will overcome the challenges.

“This story breaks my heart as if this was my own child. The reason I talk about values with passion is because I believe that the campaign can save someone like Daniel Adongo from degenerating into the abyss of despair. There's no substitute for values,” Kenya Film Classification Board (KFCB) CEO, Ezekiel Mutua posted on his Facebook account.

"When you succeed in sports or art or whatever sphere of life, you need faith, discipline and mentorship to stay the cause. May God give Daniel a second chance and restore him fully."

Sam Gichuru, founder of the nailub, a tech hub wrote: "If we keep mocking people who fail, people will stop trying to achieve great feats. Failure is a sign you tried something difficult. Learn to celebrate failure. Daniel Adongo, breath in, this is just a speed bump."

His father Joe Adongo thanked Kenyans for the outpouring of support saying the family was working to bring the situation under control.

“Getting the process underway to resolve the difficulties our beloved son is going through are underway. We ask that at this moment of difficulty that we are accorded the necessary privacy as we try to remedy the situation.

“It is understandable that such a situation can befall any young person. We are grateful that the outside world has empathised with us and as a family we don’t take for granted the support we have received,” the senior Adongo told Standard Sports.

“I request that we leave it at that as we work to resolve the difficulties he is going through. Let us continue showing him the love he so needs,” he said. ?