Although Egyptian table tennis player Ibrahim Elhusseiny Hamadtou failed to win a medal, he has become one of the most uplifting stories at the Tokyo 2020 Paralympic Games.

At the Paralympics full of stories of athletes who have overcome limitations to compete at the highest level, Hamadtou, who lost both his arms during a childhood train accident, stands apart, holding the racket with his mouth and serving by flicking the ball up with his right foot.

On Friday, Hamadtou, now 48 years old, lost to Chinese player Chen Chao in men's singles. "It is an honor to play against a Chinese player. All the Chinese players are really strong," he said.

He lost to Park Hong-kyu from South Korea on Wednesday, ending all the competitions at his second Paralympics.

"Hamadtou gets better every time he competes. From now on, we will start to work for the Paris Paralympics," said Hossam El Shobary, the coach.

Hamadtou was injured when he was only 10 years old. He used to play both football and table tennis. With his situation, it seems logical for him to play football. "But football is too dangerous for him. With no arms, he cannot protect himself when he falls," the coach said.

Moreover, Hamadtou was drawn to table tennis for a challenge following an unfriendly statement. "One of my friends said why don't you do something you're capable of, and that fired me up to decide to play table tennis. I wanted to prove that I can do it," he said. 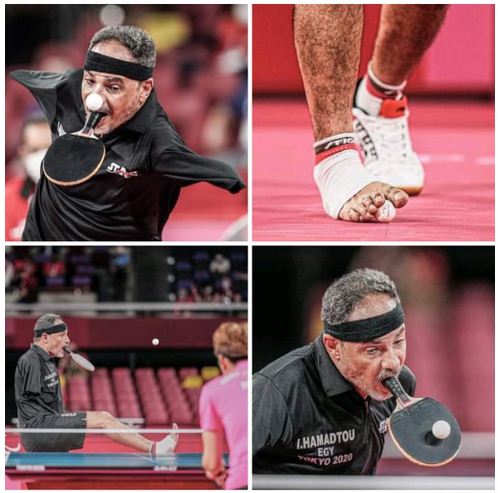 It was a challenging path. At the beginning, Hamadtou tried to put the table tennis racket under his armpits but failed, then he decided to hold the racket in his mouth. "I was surprised when I succeeded," he said.

It took Hamadtou nearly a year of practice to get used to holding the racket with his mouth and making the serve. "With practice and playing regularly, my skill improved," he said.

He said the sport has become a part of his life. "The sport has given a lot to me. To be without it is like living life without water."

Speaking of the video of him playing table tennis going viral on social media, Hamadtou said "the video was a message to the world that there's no impossible."