In an Instagram post this morning, the Dutchman posted a picture of himself alongside his partner Estelle, with the pair holding an ultrasound of their child.

“Happy to announce that we’re expecting a little one,” he captioned the picture. 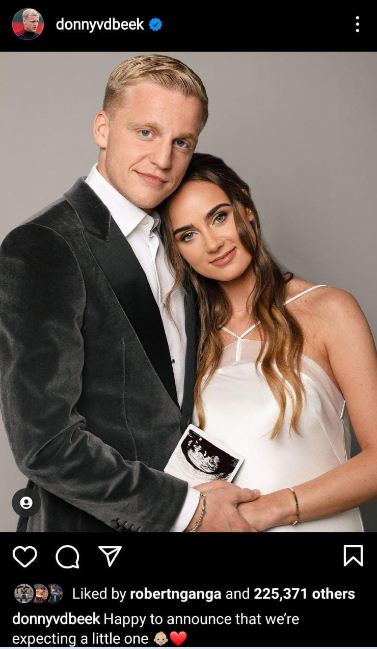 Congratulations to the couple soon poured in. Jesse Lingard, Alex Telles and Diogo Dalot congratulated the couple on their exciting news.

His compatriot Andy van der Meid commented on a social media post and joked. “Congratulations, is his name Ole Gunnar?” The emoji with a laughing face and the heart of love follow.

The 24-year-old midfielder and the 25-year-old daughter of former top footballer Dennis Bergkamp have been together for more than two years.

Van de Beek is not the only United man expecting a new arrival in 2022 as Cristiano Ronaldo and girlfriend Georgina Rodriguez are expecting twins.

Portuguese star 36-year-old shared news with fans on Instagram last Thursday, screaming that their “heart is full of love.”

Ajax’s well-known academy product, the midfielder, has played 175 games in Dutch clubs and scored 41 goals, but his career is stalled at Old Trafford.

He is well out of favour under the United boss with the 24-year-old given limited chances to make an impact following his £40million move from Ajax in the summer of 2020.

By Ochieng Oyugi | 27 minutes ago