Police were forced to intervene after a streaker interrupted Manchester United's Europa League clash at Granada on Thursday.

The pitch invader ran on early in the first half, despite the game being played behind closed doors in Spain.

It is unclear who he is or why he was in the stadium.

United are bidding to take a first-leg lead in their Europa League quarter-final as Ole Gunnar Solskjaer looks for some silverware as Red Devils boss.

His side are heavy favourites to make it through to the last four and the competition is their final realistic chance of a trophy this season.

Marcus Rashford gave United the lead before half-time with his 20th goal in all competitions.

Despite the difference in both the talent at his disposal in comparison to Granada and the stature of the two clubs, Solskjaer was taking nothing for granted before the match.

He said: "They're full of experience and character which you expect from teams who have been promoted recently.

"They had a great season last year and I think they're one of the teams who have played the most games this season."

If United are successful over two legs, they will face either Ajax or Roma in the semi-finals.

Photos of the streaker courtesy of Getty Images: 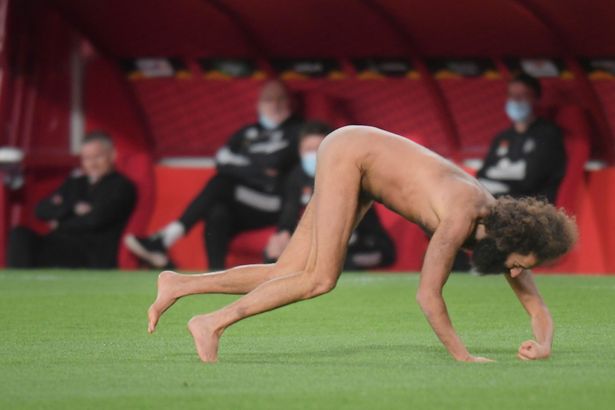 Five years ago, Western Bulls and Kabras Sugar, stood out as the only clubs that played rugby from...

We didn't deserve to be on the pitch: Xhaka blasts team mates

Down to the wire in KPL title battle