A Brazilian beauty queen who claimed she had an affair with soccer star Cristiano Ronaldo is intensive care after undergoing plastic surgery to boost the size of her thighs.

Andressa Urach is in a “serious condition” in hospital after she suffered an infection following an op to remove a gel doctors injected her with make the top of her legs bigger.

The 27-year-old was a runner-up in Brazil’s popular ‘Miss Bumbum competition’ fell ill on Sunday.

She famously greeted Real Madrid ace Ronaldo naked at the World Cup after claiming the two had an affair which he he denied, was hospitalised on Saturday.

Earlier today, mum Marisete De Favari asked fans to pray for her daughter after her condition worsened following a second operation to drain the rest of the gel. 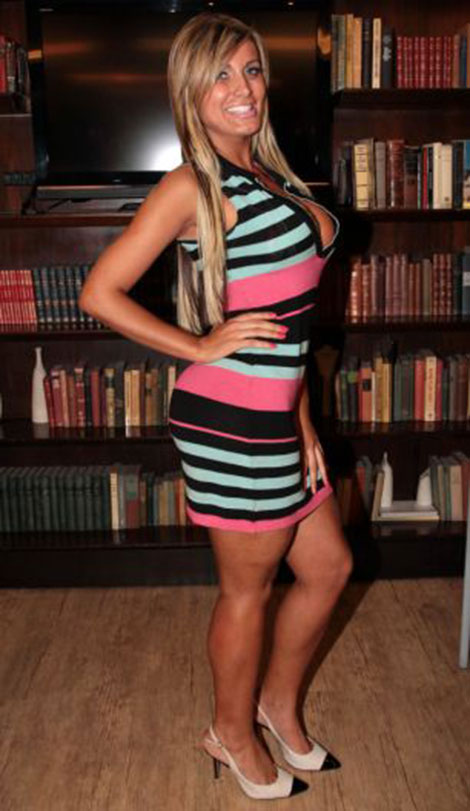 It has Medics said the model, currently working as a TV presenter in her homeland, is being sedated and breathing through a ventilator.

Andressa, second in the 2012 ‘ Miss Bumbum ’ contest to find the sexiest bottom in Brazil, infuriated Real Madrid striker Ronaldo in April last year by claiming he had cheated on girlfriend Irina Shayk with her.

She claimed the footballer slept with her in a hotel just 48 hours before a Champions League semi final which his team lost 4-1 to German side Borussia Dortmund .

The Portuguese winger , 29, took to his Facebook page to say he was “deeply outraged.”

He accused Andressa in a statement of “pure fiction and forgery” and “seeking the limelight on my account” and insisted he was at the Madrid hotel she claimed they made love at for an interview with a reporter.

The pretty brunette greeted him wearing only a coat of patriotic Portuguese red and green body paint when he arrived at his country’s base camp hotel in Caminas near Sao Paulo at the start of the World Cup in June.

Six days later she was ejected from Portugal’s public training session at a nearby football stadium and told to stay away from the Real Madrid star.

The product that has caused her her health problems, hydrogel, is allowed in Brazil in small doses where it is used to increase the size of women’s thighs and buttocks.

Andressa is said to have had twice the recommended amount of the jelly-like material injected into her legs.

Her mum told the model’s fans today/yesterday in a Facebook message: “I am certain because of my faith in God that she is going to be cured.

“I thank all of you from my heart and ask you to continue praying, because this is going to be just one more battle and I know my baby is going to come out of this victorious.”

Andressa acheived more success than the winner of Miss Bumbum 2012, curvy model Carine Felizardo, going on to star in the Brazilian version of reality show The Farm.

Last year’s Miss Bumbum competition was rocked by scandal after two of the candidates were accused of bribing judges to rig the votes .

In October Maria Brandao, 39, died in Goiania, the capital of the central state of Goias, after being injected with hydrogel.

Last month hospital bosses in Bogota, Colombia, declared an alert after a 43-year-old woman died from kidney failure following an op to increase the size of her buttocks.

OK, it's confession time. Before Arsenal fans across the globe have multiple heart attacks, let us confirm that Thierry Henry is NOT a secret Tottenham supporter.