It will be a different world when this Covid-19 menace comes to an end. Life will never be the same again anywhere, even in golf.

To compete with anybody else in Kenya and the world, you will need a new different Handicaps under the World Handicapping System, WHS. Is your Golf Club ready to issue new Handicaps per the WHS?

It is, therefore, worrying that in the entire country, only the Sigona Golf Club course, under the watch of their scientifically inclined Chairman, Engineer Ben Njoroge, had undergone the required Slope Rating at the end of 2109. 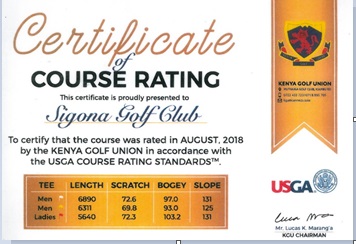 The WHS was launched in the first week in January in the US and is gradually being rolled out to the rest of the world. It is actually not an entirely new system since most of it is adoption of the course difficulty rating concept already being used in the USGA Handicapping System.

But why the system change in the first place? In a word, Equity defined: defined as the quality of being fair and impartial.

.The biggest difference between the six main active Handicapping systems that have been active in the world has been Handicapping.

We are all familiar with the R&A's fallacy that your handicap remains the same at all courses.

The USGA were more pragmatic and argued that, since every golf course is different from any other, the difference would affect his performance at the other course.

The USGA came up with a concept that captured the difference in difficulty of the courses. Attention was paid to the length and width of fairways, trees, hazards, bunkers, rough, and many other factors. They called this the Course’s Slope Rating.

A standard length, mild terrain, course with medium-sized fairways, bunkers and rough was granted a figure of 113. Slope ratings range from a minimum of 55 for a very easy short course to a maximum of 155 for extremely difficult courses.

The various golfing bodies in Europe, USA, Asia and Africa, have now agreed to ditch their old handicapping system and adopt the WHs as the Universal Handicapping systems to be used all over the planet.

The intent behind the World Handicap System, in comparison with the existing Handicap Systems, is for a player’s handicap index to represent demonstrated ability, instead of allocating strokes based on potential ability. Read that again.

It means that instead of trying to identify how well a golfer might play in the future based on potential, the new system analyzes their past performance.

With a common system, you will now be able to compete with anybody else in the world equitably. Even when you tee off from different tees, as is the growing trend of building and using different tees at the same time, the new still allows for a fair comparison of scores.

The first step in creating the WHS is rating all the golf courses in the world. Not an easy task. The rating is done by a team of scratch and boogie golfers, who play the course several times and compare results. They do the same from different tees.

The second step is changing your handicap. Your new Handicap shall now have one decimal point and has been renamed Handicap index. For example, 9.8 or 12.1.

Now here comes the tricky part. Every time you play at a different course, or even different tees at your home course, you will play with a different Handicap.

Depending on various variables, you will be allocated Playing Handicap that will be your Handicap for that Course when playing from that tee.

Thus, a 13.5 Handicap Index golfer from Railways Course may see his Handicap rise to 16.7 when playing at the longer and hillier Sigona course. A 23.5 Handicapper at Muthaiga may see her handicap go down to 21.2 at the flatter and wider Royal Nairobi course.

A golfers’ playing handicap for a particular round will also depend on the tee he plays from. Hence, that 13.5 Handicap Index golfer from Railway, whose base handicap when playing from the blue tees at Sigona went up to 16.7, may see his Handicap go up to 18.5 if he plays from the black tees, or down to 14.8 from the red tees at Limuru.

Under the new system, a player’s handicap will be based on the average of the best eight scores from their last 20 rounds. But the allocation of a new Handicap will only require three cards, but more rounds will yield better accuracy.

The other new feature in the WHS notice is the elimination of the gender-based designation of Tees as Men’s and Ladies’ Tees. Instead, you will have Championship, back, mid, and front tees.

Some clubs already prefer colour-coding the tees marks and on the scorecard: Black, Blue, Yellow, White and Red, to remove the gender discrimination factor. Anybody will be able to play from any Tee depending on their ability.

What I do hope the KGU is working on is the development of a single national internet-based phone App such that a golfer playing away from his course will be able to enter their scores by phone whether they are in Machakos or Kazakhstan, while conveniently sipping the traditional post-round libation at the 19th hole.

Previously, a player had to deliver the physical scorecard to his home club, and quite often some deliberately failed to do so if they had played well that day, in fear of a Handicap chop.

Such a system will also help tame Land Rovers; those roving bandits who deliberately play away a lot but never report their good scores back home, in fear of a chop on their Handicap, then scalp your wallet the next time you bet with them.

USGA’s have their GHIN system, and South Africa’s has the Handicap Network Africa. Why not Kenya? Over to you KGU, every Kenyan golf pays a subscription fee for a KGU certified Handicap.

You can do a trial run for your new handicap by inserting three to five gross of your last gross cores on the table at ttps://www.calculator.net/golf-handicap-calculator.html. Eight to ten scores are better and more accurate.

But first, you must adjust the scores for any hole where you scored more than a double bogey. The maximum score allowed is a double bogey. For the trial, you may insert your usual score on that hole.

You will need to know your Course Rating; it’s written on your scorecard. For Slope rating, enter a number between 120 and 130, unless your course has already been slope rated.

The question you must have is what Handicap you will play off when you play at a new course or from different tees at your home course.

Any time you go to a play at a new course, the first thing you will do is look at the chart at the Pro Shop or Starter. Or use the proposed KGU App.

Enter your Handicap Index and the Slope and Course rating of the tees you will be playing from. Your playing Handicap from the tees chosen will then be indicated or read on a chart.

Lipouts: Whoever referred to women the weaker sex had not the Viking kind. And not just Helga, Hagar the Horrible’s no-nonsense wife. With the Asian swing of the LPGA season cancelled due to Covid-19, Anna Nordqvist teed it up against the men Pros at the Outlaw Tour. Surprise! She tied for the lead in the first round after a bogey-free round, shooting 8-under 64 among a field of 80 men. And guess what, she teed it up with the men from the same back tees on the 7,250-yard course!

The Champions League 8th final second leg between Liverpool and Atlético Madrid, played in front of 52,000 people on March 11 in England 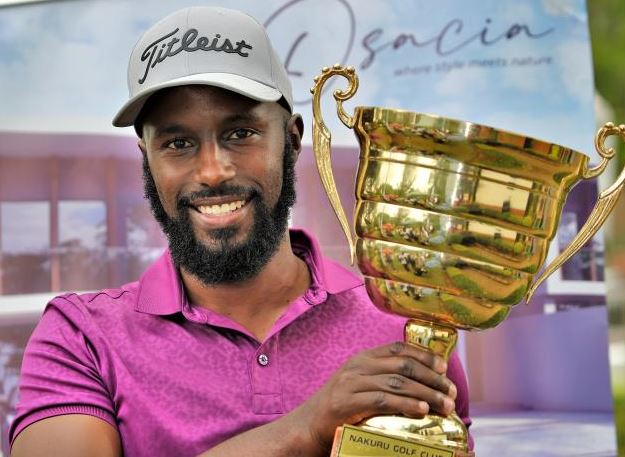