FIFA president Gianni Infantino said on Tuesday that breakaway Super League clubs cannot be "half in, half out" of the established soccer system, while Real Madrid supremo Florentino Perez insisted he is trying to "save football" with the move.

European soccer's governing body UEFA has threatened to ban the 12 clubs, who include Manchester United and Real Madrid, from domestic and international competition, with Infantino adding his voice to the backlash.

"We strongly disapprove... if some go their own way then they must live with the consequences of their choice, either you are in, or you are out. You cannot be half in and half out." Infantino told UEFA's congress in Montreux, Switzerland.

UEFA chief Aleksander Ceferin has not held back on his views of the renegade clubs, who will be guaranteed places in the new competition in contrast to the Champions League which requires teams to qualify via their domestic leagues.

Having labelled the competition a "spit in the face" of football fans, Ceferin insisted, however, that there is still time for reconciliation at the UEFA congress on Tuesday.

"I would like to address the owners of some English clubs. Gentlemen, you made a huge mistake," he said. "Some will say it is greed others disdain, arrogance or complete ignorance of England's football culture but actually it doesn't matter.

"What matters is that there is still time to change your mind, everyone makes mistakes, English fans deserve to have you correct your mistake, they deserve respect."

At the same congress, the International Olympic Committee warned that the existing structure of European sports is under threat by self-interest and pure commercialism.

"It is challenged by a purely profit-driven approach that ignores the... social values of sports and real needs in the post-coronavirus world," IOC President Thomas Bach said. 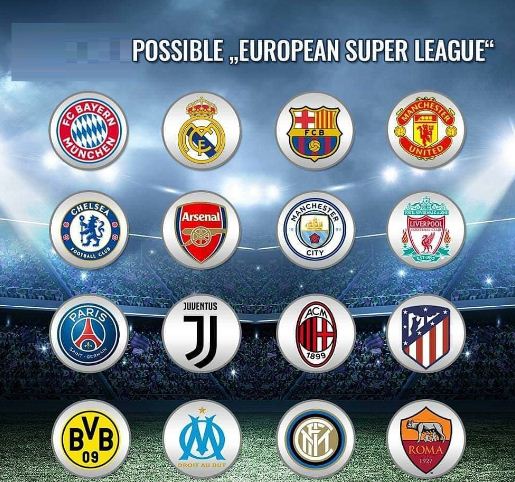 There have been few voices that have backed the breakaway league, with owners of the 12 teams conspicuous by their absence.

The first senior figure of any club involved to publicly talk about the move was Perez - the new chairman of the Super League - who said football needed to evolve and adapt to the times.

"Whenever there is a change, there are always people who oppose it... and we are doing this to save football at this critical moment," Perez said on the Spanish TV show El Chiringuito de Jugones.

"Young people are no longer interested in football. Why not? Because there are a lot of poor quality games and they are not interested, they have other platforms on which to distract themselves."

Premier League clubs were meeting on Tuesday without the 'Big Six' who have joined the breakaway Super League. The meeting was expected to decide on a strategy to be taken by the remaining 14 clubs to protect the league and their interests.

Everton, currently eighth in the Premier League and in with a chance of securing Champions League football for next season, slammed the move of "preposterous arrogance" which was tarnishing the reputation of England's top-flight.

Meanwhile, UK Prime Minister Boris Johnson will host a roundtable with English football's governing bodies the FA and the Premier League on Tuesday, as well as fans' representatives, as he seeks to block plans for the league.

Spurs appoint Mason as interim boss for remainder of season