Egypt and Liverpool talisman Mohamed Salah is in Nairobi, Kenya ahead of the crunch AFCON qualifier clash against Harambee Stars.

Salah and his Egyptian teammates touched down at the Jomo Kenyatta International Airport (JKIA) on Tuesday night.

Both Egypt and Kenya need a crucial win on Thursday (7pm EAT) in a tight Group G ahead of the 2021 Africa Cup of Nations, the 33rd edition of the international men's football championship of Africa.

Having missed the two legged-fixtures against Comoros last year (November) due to COVID-19 related restrictions, Olunga is optimistic of making the impossible possible on his return to the team.

“Of course, I feel great to be back in the team after a long absence. Just getting a call up back to the national team is a motivation in itself and I’m humbled to have gotten the task to help my country. I hope we are going to have a good experience in the upcoming two fixtures,” said Olunga, who scored the equaliser in Kenya’s famous 1-1 draw against Egypt in the first leg in Cairo in November 2019.

Though Kenya are technically out of contention going by their results in the opening four matches (three draws and a loss), they could still return to the continental finals. 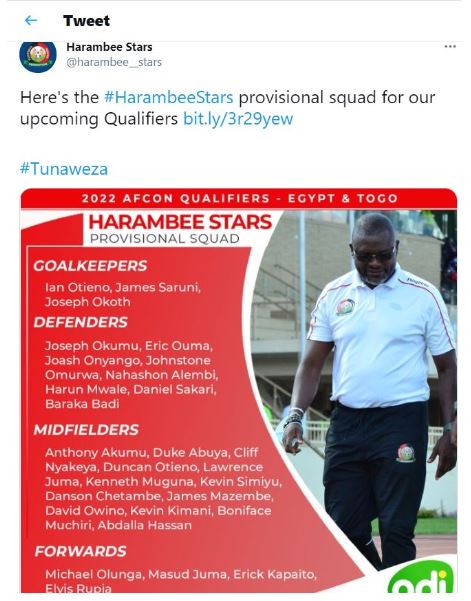 Stars play Egypt on Thursday at the Kasarani Stadium and then face Togo in Lome on Monday.

Photos of Egyptian players at the Jomo Kenyatta International Airport in Kenya:

A Brazilian football team was ordered to remove a “sexist and misogynist” ad on Tuesday after it posted a...

We didn't deserve to be on the pitch: Xhaka blasts team mates

Down to the wire in KPL title battle