Marcus Rashford's generosity off the pitch has extended to on it this time with Anthony Martial receiving the benefits.

The Manchester United striker netted a hat-trick against RB Leipzig on Wednesday evening, coming off the bench to strike three goals in 27 minutes.

But Rashford could have had one even quicker when United won a penalty in the 87th minute. The forward, however, selflessly put his hat-trick dreams to one side and let Anthony Martial take it.

The Frenchman has yet to score this season and, arguably, needed the goal more than Rashford.

It was a decent gesture but nothing Rashford hasn't seen before. In fact, the 22-year-old was once on the receiving end of it.

Earlier this month Rashford shared a story from United's Champions League win over Paris Saint-Germain in 2019.

"Let me tell you a little story about @RomeluLukaku9," he tweeted.

"We are playing PSG in the second leg of the Champions League, with little little hope of qualifying. 2-0 down on agg. 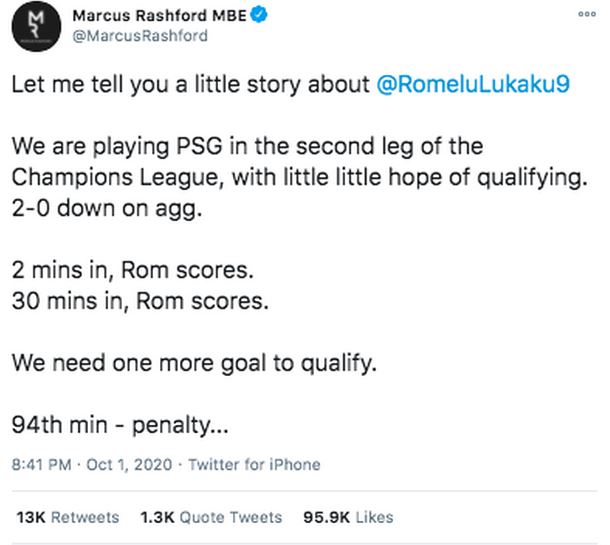 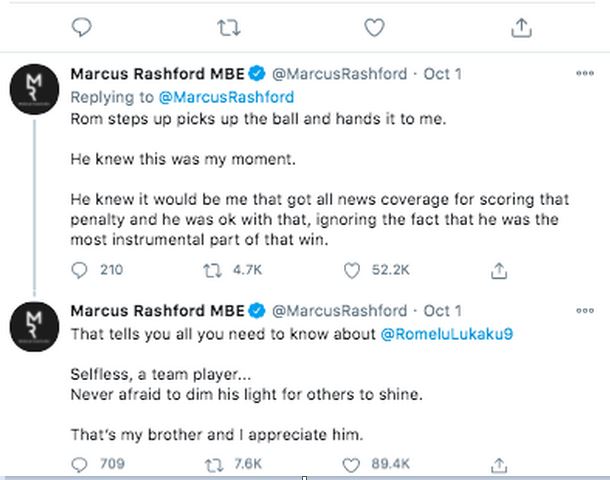 "Rom steps up picks up the ball and hands it to me. He knew this was my moment.

"He knew it would be me that got all news coverage for scoring that penalty and he was ok with that, ignoring the fact that he was the most instrumental part of that win.

"That tells you all you need to know about @RomeluLukaku9. Selfless, a team player... Never afraid to dim his light for others to shine. That's my brother and I appreciate him."

Rashford, though, still managed to get his hat-trick goal with Martial repaying the favour and setting him up late on.

Speaking after the game, Rashford said: "I feel confident with Anthony taking them as well. So no problem."

Solskjaer has said that the game plan instructed Martial to be on penalty duty but to simply give up his hat-trick chance by placing the ball on the spot for his team-mate shows what kind of player Rashford is.