Kenya’s Michael Olunga has for several years now established himself as one of the most lethal strikers in world football.

Popularly known as 'The Engineer', the Harambee Stars hitman was on Friday voted the Meiji Yasuda J.League KONAMI Monthly MVP for August for his red-hot form that saw him score six goals in six appearances.

The Kashiwa Reysol star has netted 15 goals in 15 games this season, propelling his club to fifth position (26 points) on the table standings.

The former Girona forward promised to continue with the scintillating form despite challenges brought about by the Covid-19 pandemic.

“I would like to thank everyone involved in the J-League for being selected as the MVP for August of the Meiji Yasuda Life J1 League. I also thank my teammates, coaching staff, and fan supporters.

“Hopefully, this is the beginning of many more, I am always working hard for the team's victory," he said after receiving the August MVP trophy. 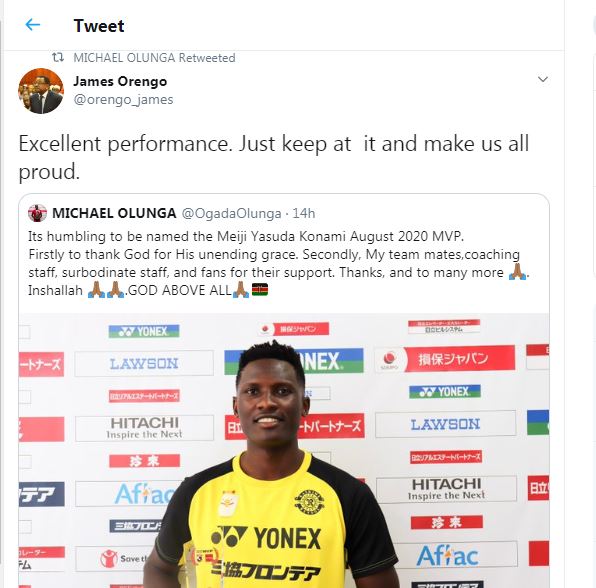 “It has been an unusual season because of the coronavirus but I will continue to work hard. I’m pleased with the continued development of the J-League and I will do my best to keep up,” Olunga pointed out.

Olunga, who has previously played in China, singled out his stint with Spanish side Girona as the best of his career thus far.

“You could see the level and quality of the game was more mature and the players’ ability in terms of technique; the tempo of the game was quite different and playing against teams like Real Madrid and Barcelona was a good thing for me,” he told KTN News in April.

He further urged his Harambee Stars teammates who play in the KPL League to remain united during the coronavirus pandemic.