Last updated 2 months ago | By AFP 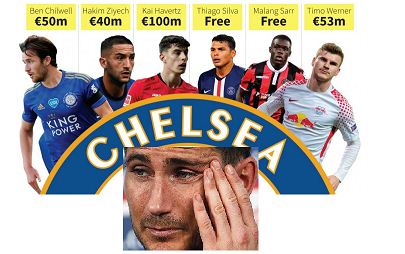 Frank Lampard admits expectations at Chelsea will soar after an expensive recruitment drive ahead of the new Premier League season.

The Stamford Bridge club have spent nearly £200 million ($263 million) as they have brought in on Hakim Ziyech, Timo Werner, Ben Chilwell, Thiago Silva, Kai Havertz and Malang Sarr and could add even more new faces.

The former Chelsea midfielder is under no illusions that owner Roman Abramovich will expect improvements on last season.

The club finished fourth in the Premier League to secure Champions League qualification in Lampard's first campaign, but lost the FA Cup final to Arsenal and were thumped 7-1 on aggregate by Bayern Munich in Europe.

"I'm very aware that a club like Chelsea, even though we had a transfer ban, even though the year was difficult, expectations are going to go up hugely," Lampard told The High Performance Podcast.

"And I just have to accept that as part of the job, and try and go about my job as well as I can."

Lampard said he expected a "messy patch" that would challenge his managerial skills, now that the honeymoon period at Chelsea was over.

Chelsea will start their Premier League campaign away at Brighton on September 14.

"I think you have to be understanding that you're coming to the messy patch," Lampard said. "I think our messy patch probably happened actually back end of the season.

"I think we achieved a lot... because nobody expected us to come in the top four. But we lost a cup final, and then we lost to Bayern Munich.

"And it's a bitter taste for me, I go away and I have a bad feel about those games.

"So I understand that those issues and problems will come again. It's just that I, and we as staff, have to double down. We have to work harder."

Face masks and no hugging for returning Premier League fans