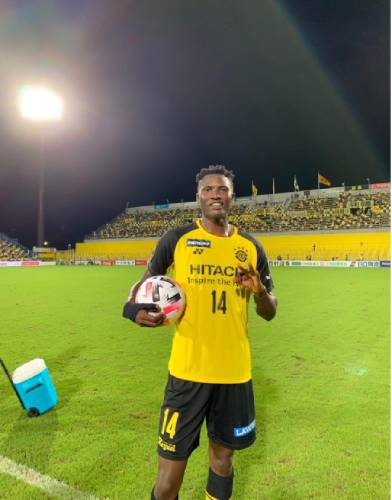 A man who does not disappoint on and off the pitch, whether home or abroad. And as always, Kenyans were up in congratulating their own.

This time around, the lethal striker scored a hat trick, in their Japanese league match against Vegalta Sendai.

Olunga’s abracadabra saw him hit the back of the net three times. This effort helping his Kashiwa Reysol side triumph over Vegalta Sendai in a 5-1 thrashing in the top tier league in Japan.

The hat trick now pushes the ace ahead in the race for the golden boot, as he leads with eight goals out of six appearances this season. Six goals came in the past three fixtures.

"God's favor, one more for keeps. Thank you for the support,” Olunga tweeted holding the ball after the game.

The tweet was followed by a tone of comments from fans across the globe. Many wishing him well in his endeavors.
“I am so happy for you and the whole Kashiwa Reysol family…keep doing what you are doing and may God protect you from any injuries, “ tweeted one Steven Otieno, a diehard fan.

The J-League official handle also congratulated the talisman for the exceptional display since he set foot in the league.

“A hat trick yesterday and 6 goals in his last 3 matches. He can’t stop scoring and they can’t stop winning, “tweeted the J-league official.

Kashiwa Reysol now sits 7th among the 18 teams in the league standing, with twelve points from 7 matches.
With their current form, and Olunga’s magic, the team is surely expected to make strides and close the seven-point gap between them and the league leaders, Kawasaki who are unbeaten in their last five fixtures.

The Harambee stars head coach Francis Kimanzi was also among other Kenyans who poured out their congratulatory messages to the giant goal machine.

"Scoring eight goals which include a hat-trick in seven matches in your first season in the top flight is not a mean feat. He has worked hard to prove himself in a foreign land and I can only wish him an injury-free career,” commented Kimanzi.

He also went ahead to laud the talisman and other Stars players, who have kept their form even after the covid-19 hiatus that brought soccer to a sudden halt.

"It shows he also worked hard when sporting activities were suspended for he did not shed off his scoring form…I am also impressed with other Stars players who have been doing well from the time various leagues across the world resumed," said the former Mathare United coach.

Olunga’s search for the golden boot now looks promising and he now has his eye gaze at the prize he narrowly missed last season.

The forward settled for the second position after scoring 26 goals in the run-up for the coveted award. However, the lad’s effort did not go unnoticed as he pulled his team back to the top league.

Before settling in Japan, the goal poacher played for Girona in the Spanish La Liga. Back then, just as he is now, the engineer has never lost a goal math.

While at Girona, Olunga set a landmark achievement by bagging a hat trick, becoming the first Girona FC player to achieve the fete, in the Spanish La Liga match.

The effect of that saw the Orange Democratic Movement (ODM) captain Raila Odinga and other Kenyans celebrate the striker.

"Congratulations to Kenyan born Michael Olunga on becoming the first @GironaFC player to score a hat-trick in the Spanish #LaLigaSantander, “tweeted Odinga.

Now, just like other players who exhibit nomadic football careers, the star is yet to move to another challenge, and greener pastures. This is if his recent hint is anything to go by.

“Until I complete the move, I am still a Kashiwa Reysol player. I have absolutely enjoyed my time at the club and in Japan. Let’s wait and see what comes next,” said the player, who also admitted to many calls from clubs that were astounded by his performance.

Several dozen protesters in masks gathered in front of Japan's National Stadium on Friday, the day the...