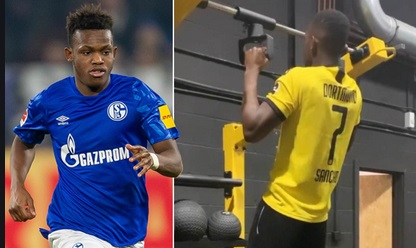 The 19-year-old, who joined the Bundesliga side in a £11 million deal from Manchester City last year,  was doing independent training when the picture

Just 30 kilometres (19 miles) separates Gelsenkirchen-based Schalke and Dortmund, but there is no love lost between the sides in the Ruhr Valley, the industrial heartland of western Germany.

Despite their clubs' deep rivalry, Matondo is friends with Dortmund star Sancho.

The the gym picture was quickly taken down after a flurry of angry comments from Schalke fans.

"I want to be honest: I was naive and put on the shirt for a private training session. It was from my close friend Jadon Sancho. I only wore it because of Jadon, it had nothing to do with Dortmund," the Welshman wrote on Instagram.

"There is no excuse for this immature behaviour."

"I would like to apologise to everyone who was annoyed or insulted by my behaviour," the 19-year-old added.

"I can promise every supporter that from day one, I have identified 100 percent with Schalke.

"I will always give everything when I run out for Schalke to prove how much I love the club."

On Tuesday, Schalke sports director Jochen Schneider had said he made it "very clear" to the Wales international what he thought of his "ill-considered action".