Football Kenya Federation (FKF) president Nick Mwendwa chaired meetings on Wednesday to plan the return of football in the country as the Coronavirus disease ranges.

Mwendwa spearheaded the third and fourth of a series of meetings with members from the Eastern region (Marsabit, Isiolo, Meru, Tharaka-Nithi, Embu, Machakos, Kitui, and Makueni).

According to the leaders, a workable return to football is crucial guided by the FIFA 2020 Covid-19 protocols.

“We have been out of football for a long time now and it was important that we have a sit down with the FKF management to give them our recommendations on what we feel should be considered in the return to football plan,” said Makueni County's Samuel Mwongela.

Football action was suspended in March over Covid-19, and the governing body of football in Kenya believes recommendations from such meetings, coupled with directives from the Ministry of Health, will be incorporated in the final return to football formula.

FKF president Mwendwa met a section of football representatives from Western and Nyanza regions on Tuesday.

FKF is expected to unveil a massive over Sh1.2 billion sponsorship deal in Nairobi today at 10am.

Mwendwa confirmed the deal pending announcement with a cryptic tweet on Wednesday, indicating that each football club will receive Sh8 million from next season (2020/21).

The said deal will be a big boost as the Kenyan league has been without a title sponsor since 2019 following the exit of SportPesa, who cancelled the deal over punitive tax measures rolled out by the Government. 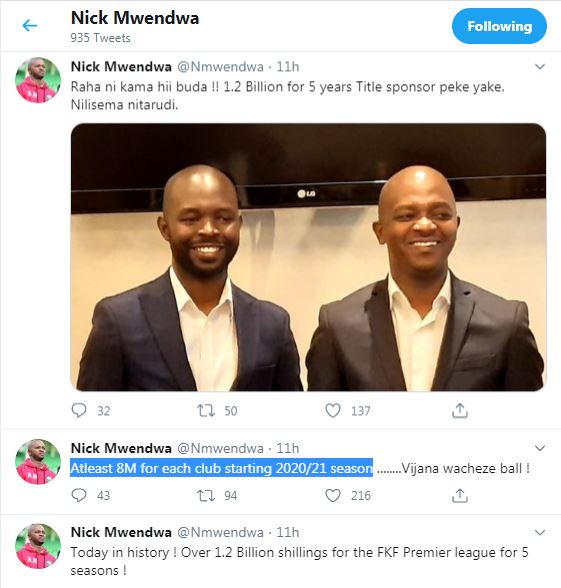 Because of a concern for false positives with coronavirus testing, the NBA on Wednesday authored a memo that...

By Maarufu Mohamed | 4 hours ago