The only Kenyan Cristiano Ronaldo follows on Instagram (PHOTO)

One of the greatest footballers in history Cristiano Ronaldo follows a Kenyan on his official Instagram account.

Ronaldo is not only the most-followed athlete on Instagram, he became the first person on social media to reach 200 million followers on the platform in January.

Cr7, as he is popularly known, currently has 220 million fans and follows 449 people.

Already the most popular athlete on Facebook with 122 million likes, the Juventus star's global presence is unparalleled.

The Kenyan that Cr7 follows is none other than the World marathon record holder Eliud Kichoge, who is also arguably the best marathoner in history. Kipchoge, who has 1.1 million fans, also follows the Juventus talisman. 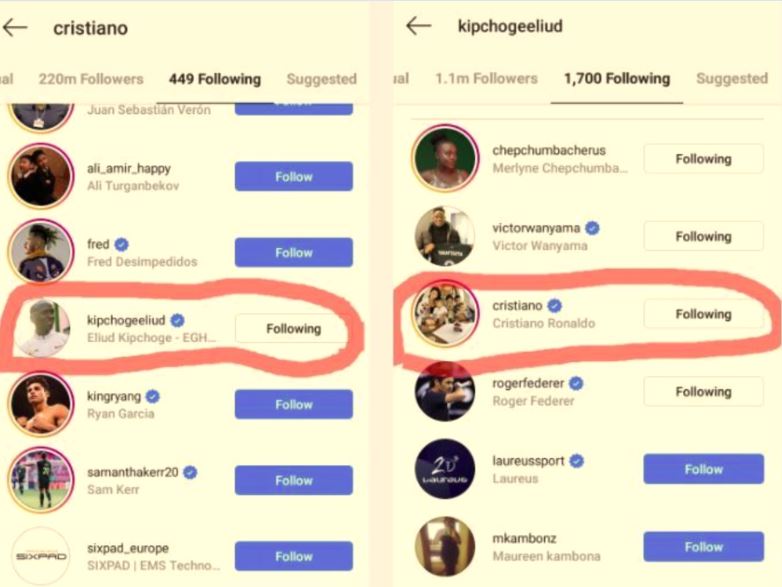 The former Manchester United winger is well ahead on the Instagram most-followed list, with Lionel Messi and Paris Saint-Germain's Neymar in second and third on 152m and 138m followers respectively.

England great David Beckham is in fifth, with LeBron James, the only non-footballer on the list, coming in at fourth. Ronaldinho is sixth, ahead of James Rodriguez, Marcelo, Gareth Bale and Zlatan Ibrahimovic.

Cr7 makes more money from Instagram than at Juve

After Ronaldo made the switch from Real Madrid to Juventus in 2018, his annual salary was in the region of $34 million (Sh4 billion), according to Goal.com.

As lucrative as that salary is, the five-time Ballon d'Or winner actually earns far more money from paid Instagram posts. That's according to a Hopper HQ study on Buzz Bingo which was published by Business Insider in 2019.

He earns $47.8 million (Sh5 billion) from paid Instagram posts and is the platform's highest earner.

Due to Ronaldo’s incredible reach on Instagram, some companies fork out nearly $1 million for a slice of the action and the former Real Madrid player reportedly pockets an average of $975,000 (Sh105 million) for each paid post on his account.

Two weeks ago, Kipchoge reiterated that he is still eager to compete against Ethiopia’s Kenenisa Bekele on October 4 despite the coronavirus conundrum.

Kipchoge pointed out that his priority at the moment is to remain healthy and free from Covid-19.

He admitted that the postponement of the London Marathon to October caught him off guard and disrupted his training routine.

The race, which was originally scheduled for Sunday, April 26, was postponed to Sunday, October 4, 2020, following the rapid spread of Covid-19 cases in the United Kingdom.

Kipchoge stole world headlines following his historic feat in Vienna, Austria, in October last year where he became the only known marathoner to break the sub-two-hour barrier in the INEOS 1:59 Challenge.

Bekele, about a month earlier, was shy of the world marathon record after winning the Berlin Marathon in 2:01:41 seconds, falling TWO seconds short of Kipchoge's 2:01:39 record, set in the same race in 2018.