Ajax have been denied the league title after 2019/20 season was ended early due to the coronavirus pandemic.

There will also be no promotion to the Dutch Eredivisie or relegation from the top flight.

The Dutch FA (KNVB) decided the way forward after a meeting with clubs and unions representing coaches and players on Friday.

“In these times, under these circumstances, it is not appropriate to speak of a championship, therefore we only confirm the placing of the clubs as per the last standings,” the KNVB said in a statement.

However, Ajax Amsterdam and AZ Alkmaar will go into next season's UEFA Champions League.

They were level on points (56) at the top of the standings with nine rounds of matches still to play, with Ajax only ahead with goal difference.

The campaign was declared over on Tuesday when the Dutch government extended a ban on public events to September to curb the spread of Covid-19.

"Unfortunately, with the cabinet's most recent corona measures, it has become impossible to complete the 2019/2020 season of professional football competitions in time - it will be crystal clear to everyone involved, from supporters and players to directors and referees, that public health always comes first.

"The professional football board, after consulting clubs, players and coaches, and with the approval of the Supervisory Board, has decided to stop the 2019/20 competition and to allow the allocation of European club football seats based on the current league table.

"This is in accordance with UEFA guidelines. In relation to promotion and demotion, it has been decided not to promote and not to be demoted,” a statement from the Dutch FA. 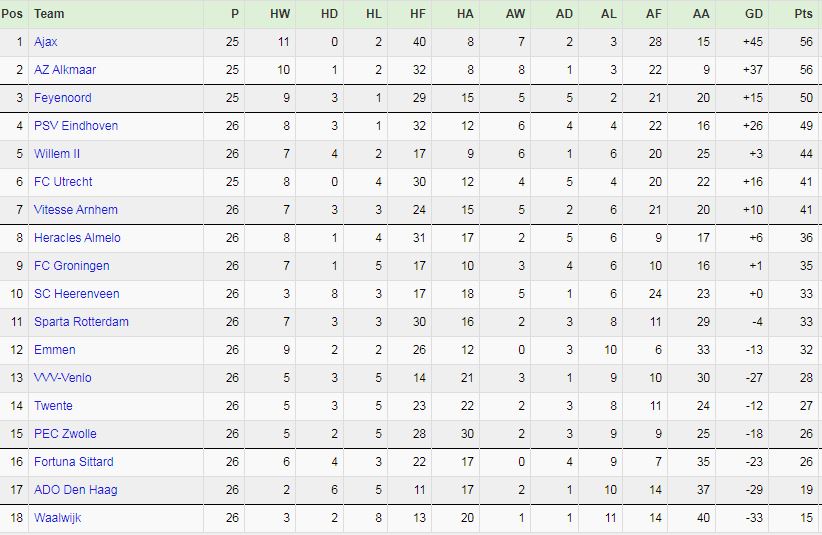 Dutch clubs had been divided over whether to try and get the season back underway, as encouraged by UEFA, but that debate was ended when Prime minister Mark Rutte extended restrictions by three more months.

The Dutch Football Association was quick to follow Rutte’s address with a statement effectively calling off the rest of the 2019-20 campaign, although they said they would be consulting with UEFA before final confirmation.

The coronavirus pandemic has led to a complete shutdown of Europe’s top five football leagues in the world.

The virus, having originated from Wuhan in China in December last year, continues to also wreak havoc in other sports disciplines.

Football will not resume soon with no return date set amid the Covid-19 pandemic.

Chelsea are being linked with a shock move to sign Gunners striker Pierre-Emerick Aubameyang from London rivals Arsenal.

By Maarufu Mohamed | 7 hours ago