Thousands of football players could be rendered jobless if the country is banned by World Football Governing body FIFA, former international players have warned.

Speaking in the wake of a looming standoff between the Ministry of Sports and FIFA, the former internationals said the current active players will be the biggest losers in case of a ban, and not the officials caught up in the wrangles.

FIFA, last week dismissed a ruling by the Sports Dispute Tribunal (SDT) to form a normalisation committee, instead insisting that the current Football Kenya Federation (FKF) officials stay in office until outstanding matters are resolved.

According to former Harambee Stars and  AFC Leopards forward Boniface Ambani, the country is not ready for a ban.

“We have about 1,000 players across all our leagues and they risk losing their employment status should we be banned by FIFA. At the moment some may be advocating for such an action but when it comes, it is the whole of football that will suffer but more so the players,” he said.

Ambani has instead called for an amicable resolution to the stand-off to ensure that no one suffers and that players continue to earn a living.

Former Harambee Stars captain Musa Otieno also pleaded that the country avoids courting a ban and the players’ interests are given priority in the matter.

Otieno said Kenya’s problems are not unique and called on all parties to sit down and iron them out.

“We cannot say that let us be banned so that we put our house in order and come back. It has happened before but nothing has changed. As a stakeholder, I want to say that we need to sit down and resolve whatever issues have brought us here.

“Some of those advocating for a ban, have another source of income but for the player’s football is their only livelihood and it must be protected.”

Jerim Onyango, a former long-serving captain at record Kenyan champions Gor Mahia said: “We need to adhere to FIFA’s directive or we will be banned and this will hinder our growth.

Onyango was also a long time goalkeeper at Harambee Stars and is currently the head coach of the national under-17 team.

“Most of the players I work with have chosen football as a career. If we are banned, they will have nowhere else to go and to do. It is football that will suffer in general,” he concluded. 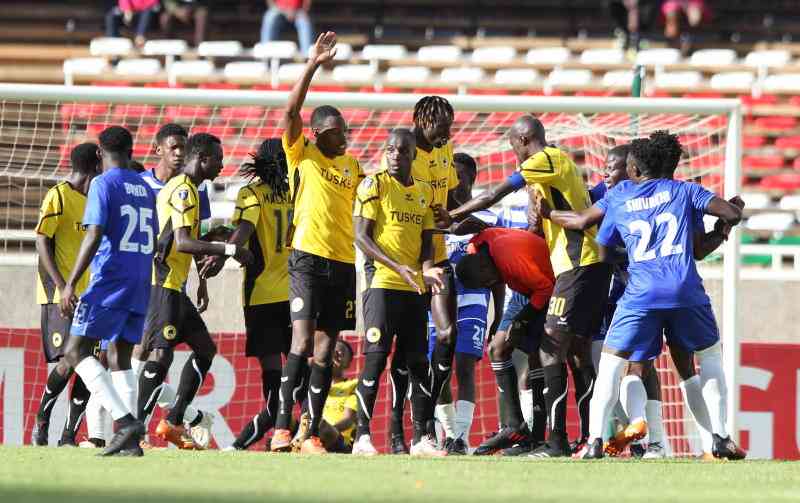 By Xinhua 21 hours ago
Football
Tonight at 10pm: Can Senegal stop England's flow in attack?
.

Red-hot Oilers ready to improve on last season's Kenya Cup feat
Rugby
By Washington Onyango
27 minutes ago
Why we were beaten 3-0 by England! Senegal coach breaks silence after their elimination
Football
By Associated Press
2 hours ago
Why France's defender Kounde was told to remove his gold necklace during Poland match
Football
By Charles Odero
3 hours ago
Sterling leaves England World Cup camp after armed robbers break into London home
Football
By Xinhua
3 hours ago
Macharia stays calm as he bags victory in Thika
Golf
By Sammy Mose
4 hours ago
.

By Associated Press 2 hours ago
Football
Why we were beaten 3-0 by England! Senegal coach breaks silence after their elimination