John Obi Mikel has had his Trabzonspor contract terminated by mutual consent - after the former Chelsea star protested against matches in Turkey still going ahead despite the coronavirus pandemic.

The Turkish Super Lig is one of the only top-level leagues in Europe not to have postponed matches, with games taking place behind closed doors.

On Saturday, Mikel voiced his displeasure at the situation, writing on Instagram: “There is more to life than football. I do not feel comfortable and don’t want to play football in this situation.

“Everyone should be home with their families and loved ones in this critical time. Season should be cancelled as the world is facing such turbulent times.”

The 32-year-old former Nigeria international joined Trabzonspor on a two-year deal last summer, but has forfeited any remaining payments in order to leave early.

A statement on Trabzonspor’s website said: “The professional football player agreement between our company and John Obi Mikel… has been mutually terminated.

“With the mutual termination agreement, the football player gave up all his future earnings.”

Mikel’s post received support from Radamel Falcao, who currently plies his trade in Turkey with Galatasaray, who replied: “You are right John. The life is more important than football.”

Mikel made 24 appearances for Trabzonspor, who currently top the league on goal difference. 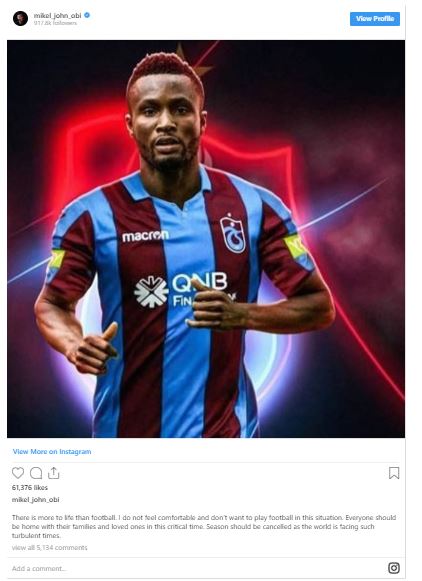 Sturridge's career has been left in tatters after the former England striker was banned until June and fined £150,000. The bombshell came after the Football Association appealed the previous sentence handed down by an Independent Commission after Sturridge was found guilty of breaching betting rules.

It came just hours after Turkish club Trabzonspor confirmed that they had terminated his contract just six months into a three-year deal.

Mirror Sport revealed that Sturridge, 30, decided himself to end the contract and there was no escape clause but felt it was the honourable thing to do because he did not want to be earning money while not contributing to the club.

Former Premier League star fighting for his life in hospital

South Wales Police confirmed the former Bluebirds midfielder, 35, is alive after rumours of his death spread on...

By World Athletics | 10 hours ago

By World Athletics | 20 hours ago