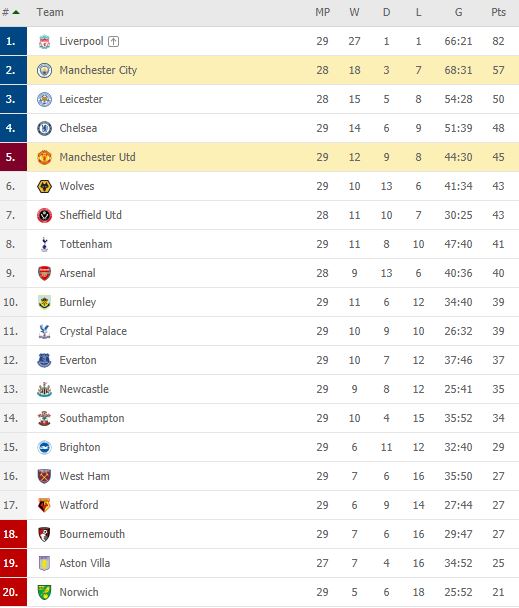 Manchester United completed their first home and away Premier League double over Manchester City since the Alex Ferguson era with goals from Anthony Martial and Scott McTominay giving them a 2-0 victory at Old Trafford on Sunday.

United's triumph over second-placed City leaves runaway leaders Liverpool, who have a 25-point advantage, even closer to the title but not even that bitter-sweet element of the win could dampen the celebrations in the Stretford End.

United may have had to defend for large parts of the second half but they were disciplined throughout and allowed City few clear chances after taking the lead in the 30th minute through Martial after a clever free-kick from Bruno Fernandes.

The arrival of Portuguese midfielder Fernandes in late January has transformed United's season and Ole Gunnar Solskjaer's improving side are now unbeaten in their last 10 games in all competitions.

The creativity and verve of Fernandes has been key to that upturn in form, but there have been improvements across the field as United have moved up to fifth and just three points off the fourth Champions League spot, currently held by Chelsea.

No-one in Manchester needs reminding that fifth place may be enough to face the continental elite next season, if City's two year UEFA ban from Europe is upheld despite their appeal.

United were shaky in the opening stages, sitting deep and allowing City space to move the ball around midfield, but after adjusting they began to take advantage of the absence of the injured Kevin De Bruyne from the City midfield.

United's opening goal was straight off the training ground with Fernandes surprising City's defence with a sharply-taken chipped free-kick over the top to Martial whose volley sneaked under the arm of the diving Ederson.

City had a Sergio Aguero effort ruled out for offside after the break but with Bernardo Silva unusually ineffective, the champions lacked their trademark midfield dominance.

Raheem Sterling was unable to connect with a low ball across the face of the goal from Riyad Mahrez in one of the few clear openings City created.

At the other end, the speedy Dan James broke clear after a wonderful through ball from the outstanding Aaron Wan-Bissaka but opted to blast at Ederson when he could have squared the ball to a team mate.

But the game was to end in raucous joy for the United faithful as substitute McTominay made sure of the points by driving the ball into the unguarded net from 25 metres after a woeful throw-out from Ederson straight to the midfielder.

"That was such a sweet moment. It's such a beautiful feeling to score like that in front of the fans. But we can’t get too carried away and need to keep pushing for the Champions League," said the Scotland international.

"We will take confidence from that but in the coming weeks we have got to keep the run going," he said.

The last time United completed the league double over City was in the 2009/10 season.

Two goals in each half from a rampant Chelsea earned them a 4-0 victory over Carlo Ancelotti's Everton on Sunday, cementing their place in the Premier

By World Athletics | 9 hours ago