RB Leipzig boss Julian Nagelsmann has finally explained why some of his players wore different kits during Champions League match against Tottenham.

RB Leipzig marked their first appearance in the Champions League knockout round with a deserved 1-0 victory at last season's runners-up Tottenham Hotspur on Wednesday as their impressive campaign continued.

Timo Werner's 58th-minute penalty after a foul by Ben Davies on Konrad Laimer was enough for Julian Nagelsmann's Bundesliga high-flyers to take a narrow lead into the second leg on March 10, although they might rue not putting the last-16 tie to bed. 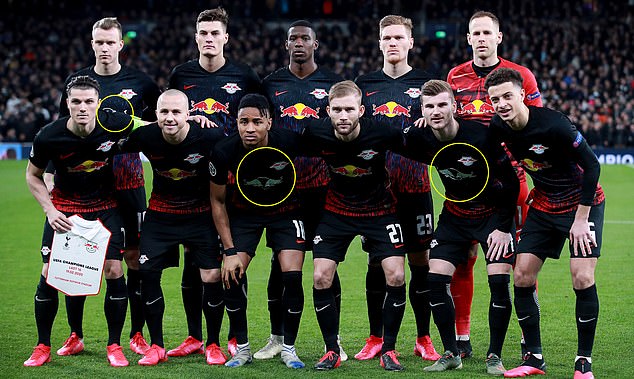 However, viewers noticed Lukas Klostermann (circled left), Christopher Nkunku (circled centre) and Timo Werner (circled right) were wearing white Red Bull logo embroidered on the front while for others the shirt sponsor was a red and yellow Red Bull design.

In his post-match conference, RB Leipzig manager said that the RB Leipzig kit box was mismatched ahead of their Champions League clash.

“On the way from the hotel the kit wasn’t complete in the different boxes,” said the Leipzig boss at his post-match press conference.

“It wasn’t on the bus, and that’s why there was a bit of a mix-up. It will certainly be sorted out for the second leg. We’ll have the right kit.”

Nagelsmann also said his side's failure to convert more of their 16 goal attempts (compared to Tottenham's 11) left the second leg on March 10 "complicated" and he will fully respect the vast experience Mourinho has in such situations.

Mourinho became only the fourth manager to take charge of 150 Champions League games on Wednesday, but Nagelsmann, who also took Hoffenheim into the competition, has steered Leipzig to within a point of Bundesliga leaders Bayern Munich.

He said his youthful and dynamic side will offer up more of the same high intensity football.

"We always try to attack the opponents very early and try to win the ball high up in their half. Today, in the second half, we tried to create a bit more on the counter.

"The first half was very good. We created three or four chances after two minutes. After the goal it wasn't that easy to find spaces and create chances. It was a good game. We had good control, good ball possession."

A frustrating night for Tottenham was laid bare when Mourinho substituted Dele Alli after 64 minutes and the England midfielder responded by hurling his boot in anger.

"I think he was angry with his performance. Not with me. I think he understands why I took him off and the team improved," Mourinho said.