English Premier League side Everton announced on Sunday night that they will end their partnership agreement with SportPesa at the end of the 2019/20 football season.

A statement seen by Game Yetu reveals the agreement was reached following a comprehensive review by the club of its commercial strategy in line with its vision and future growth plans.

"This has been a difficult decision but one that allows us to best deliver on our commercial plan and to grasp the new opportunities now open to us.

“The Club would like to thank SportPesa for all of the work that has been done together. Our partnership has seen our first team visit Africa on two occasions, as well as former players and Club staff take part in numerous activations in the region.

“This has allowed us to grow our own footprint in Africa and further strengthen our special relationship with the continent,” Everton said in a statement.

SEE ALSO: FKF elections could head back to court

SportPesa has been Everton's main partner since 2017. The Toffees will appoint a new main partner ahead of the start of the 2020/21 season. 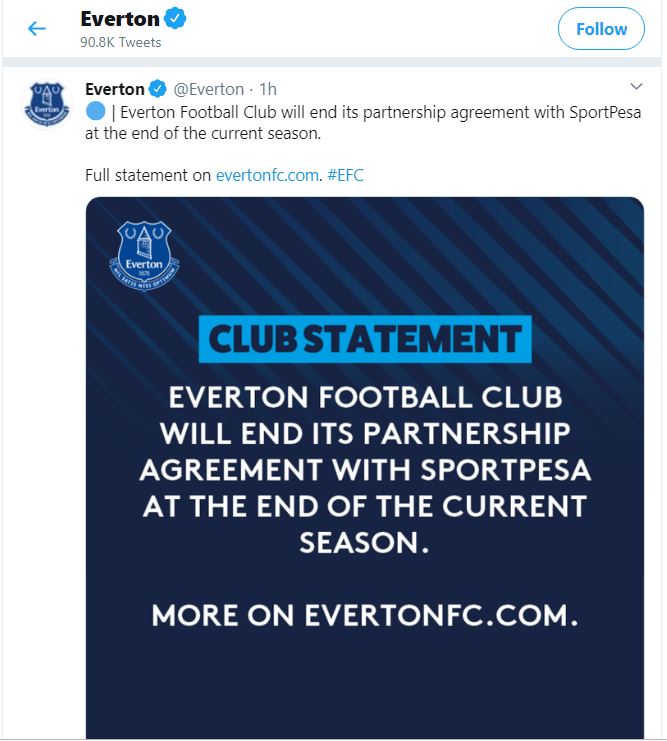 The Football Association of Ireland (FAI) on February 4 also terminated its two-year sponsorship with SportPesa.

In March 2019 the FAI announced its deal with SportPesa stating that the gambling firm would partner with it on a programme of corporate social responsibility.

SportPesa, through its spokesman, also issued a statement saying that the partnership had been dissolved by mutual agreement, adding that they respect the FAI's decision to change priorities and re-evaluate sponsorship partnerships.

For SportPesa, the end of the partnerships is another blow, following Kenyan Government refusal to renew its betting licence last year due to concerns over the rapid rise of gambling addiction and tax compliance issues.

SportPesa halted operations in Kenya and expressed disappointment with the 20 per cent excise tax on all betting stakes.

The company stated that it would only resume operations once a non-hostile regulatory environment is restored.

Founded in 2014 in Nairobi, SportPesa has operations in Tanzania, South Africa, Italy, Ireland and the UK.

If only Pamela Jelimo could turn back the hands of time

Civil Society calls for EACC and DCI to probe FKF

FKF elections could head back to court