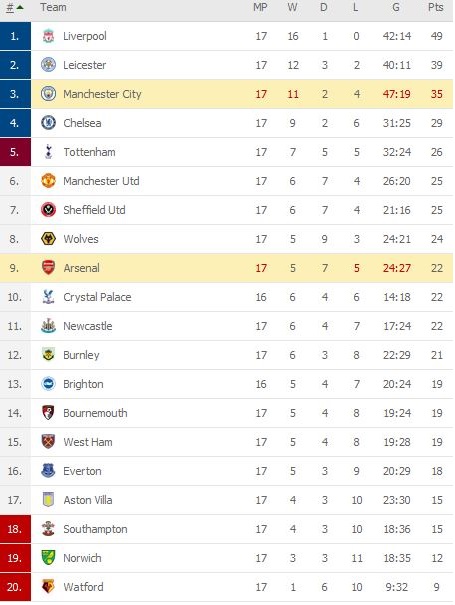 Manchester City resumed normal service in the Premier League as a masterful display by Kevin De Bruyne fired them to a 3-0 victory over a listless Arsenal at the Emirates on Sunday.

Belgian De Bruyne produced two sublime finishes and one silky assist for Raheem Sterling as Pep Guardiola's City killed the match as a contest before halftime.

Arsenal managed to avoid any more punishment in the second half but it was an uncomfortable 90 minutes for their stand-in manager Freddie Ljungberg whose side were outclassed.

There was no big celebration by the travelling City fans as the champions, who dropped eight points in their previous five games, remain 14 points behind runaway leaders Liverpool.

They did, however, close the gap on second-placed Leicester City to four points ahead of their clash next week.

Arsenal are ninth with 22 points, seven points adrift of the top four and showing little sign that things will improve.

Arsenal actually went close to scoring in the first minute through Gabriel Martinelli but a minute later were behind as City counter-attacked and Gabriel Jesus cut the ball back for De Bruyne to side-foot into the roof of the net from 20 metres.

City were two up in the 16th minute as a flowing move ended with De Bruyne crossing for Sterling to finish with ease.

Shortly before halftime, with Arsenal briefly down to 10 men as left back Sead Kolasinac limped off, City made it 3-0 with De Bruyne again given time and space to pick his spot.

Arsenal beaten 3-1 by Liverpool at Anfield

Chelsea recover from three goals down to draw at West Brom