Last updated 1 year ago | By Mirror 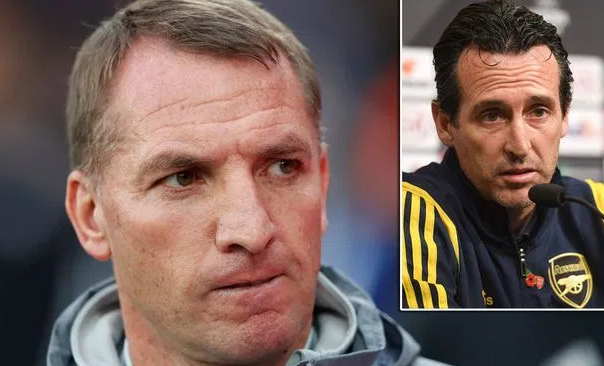 Brendan Rodgers has played down speculation linking him with a move to Arsenal as replacement for Unai Emery.

The Spaniard is under pressure at the Emirates, and takes his side to the Midlands to face Rodgers’ Leicester City on Saturday.

Victory for the high-flying Foxes, currently third in the Premier League, would see them move nine points clear of the Gunners.

And Rodgers has played down suggestions he could potentially leave Leicester to take charge in North London, if Emery is dismissed.

Insisting he is already in a “top job”, Rodgers told Sky Sports: "If you work well, it's a natural consequence of what happens in this game - you'll get linked to other jobs.

"People link me, at times, to top clubs - I'm already in a top job.

"This is a fantastic club, a great job for me and in this moment with the ownership we have, the players I have, I'm absolutely loving every minute of it.

"All the gossip and speculation, whether it's for you or against you, is part of the game.”

Arsenal have won just one of their last six games in all competitions.

And they will face Leicester without Dani Ceballos, who picked up a hamstring problem in the 1-1 Europa League draw with Vitoria Guimaraes on Wednesday night.

That could allow Granit Xhaka to return in midfield, with the Swiss having been stripped of the captaincy following his “f*** off” outburst at fans.

Also, with continued questions about Mesut Ozil's long-term future continuing to be asked, Rodgers admits he understands the difficulties Emery is currently going through.

"But as a manager you really focus on what you can control. Unai is a proven coach, he's an experienced coach, so he'll be focusing on the performance of the team and not get involved in all the background noise that goes on."

Leicester striker Jamie Vardy has been named Premier League player of the month for October.

No Aubameyang for Arsenal tonight against Southampton