Manchester City survived a scare at home to a battling Southampton as late goals from Sergio Aguero and Kyle Walker earned them a 2-1 victory in the Premier League on Saturday.

Southampton, thrashed 9-0 by Leicester City last week and beaten 3-1 by City in the League Cup in midweek, took a shock lead when James Ward-Prowse scored in the 13th minute.

City spent the rest of the game battering at Southampton's defence to little effect but finally equalised in the 70th minute when Aguero turned in Walker's cross.

Southampton dug deep trying to hang on for an unlikely point but were breached again when Walker slid the ball home in the 87th minute, at which point it appeared they were about to make up ground on Premier League leaders Liverpool.

City's joy was tempered, however, when news filtered through that Liverpool had struck twice late on at Aston Villa to also win 2-1 and preserve their six-point lead at the top.

Manager Pep Guardiola warned in midweek that Southampton would respond to their home hammering by Leicester by rolling up their sleeves and showing some grit.

SEE ALSO: Guardiola says 'not much' respect for Arsenal off the pitch

They proved him right when Ward-Prowse stunned the Etihad faithful.

Nathan Redmond and Yan Valery combined to set up Stuart Armstrong for a strike at goal and when Ederson could not gather his skidding shot the ball sat up for Ward-Prowse to score.

City had more than 70% of possession before halftime but none of their 14 goal attempts were on target.

The frustration continued after the break for City as Southampton, defending as if their lives depended on it, began to sense it might be their day.

As so often happens, Aguero got City out of a hole. 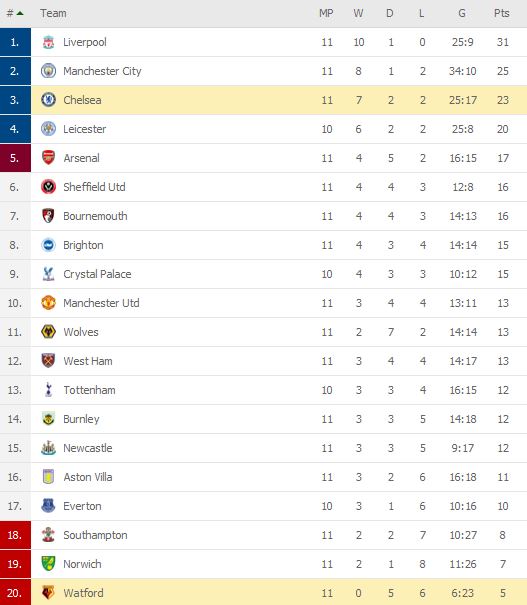 Kevin de Bruyne released Walker, who by this time was playing like an extra forward, and his low cross from the byline found Aguero who turned the ball past Alex McCarthy.

Bizarrely it was City's first attempt on target and they immediately went for the victory.

"It was a crazy game to play, scoring was one of those crazy moments. It's always hard playing against 11 behind the ball," said Walker, who scored his first goal of the season.

"We kept knocking on the door and thankfully for me the door came open and I was the one that got the goal."

Man City could be tested by counter-attacking Real, says Rooney

Who can qualify for Champions League, Europa League?

Guardiola says 'not much' respect for Arsenal off the pitch