Mesut Ozil has taken to Twitter to post a message to the Arsenal fans after Unai Emery left him out of his Europa League squad for Vitoria.

The Gunners midfielder posted a picture of himself with Arsenal coach and club legend Robert Pires. Alongside it he wrote: "Trained with this AFC legend this morning. Always a pleasure to see you my Bro Robert Pires. Best of luck for the match now from both of us." 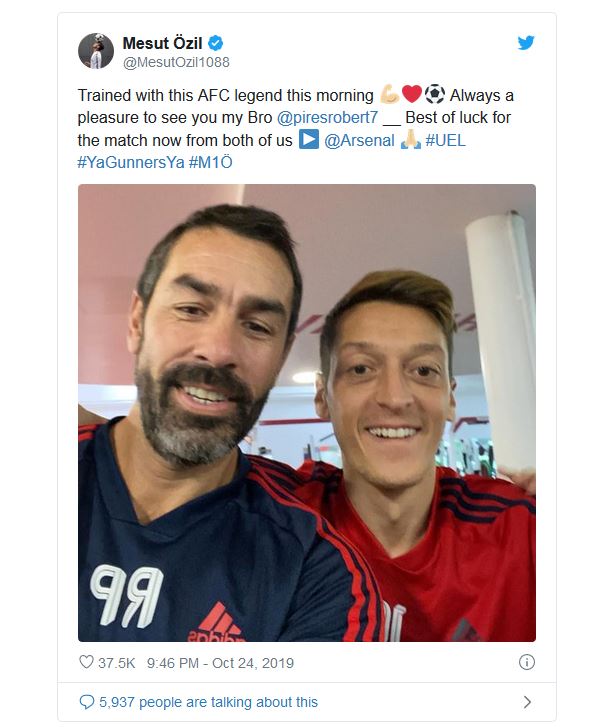 Ozil has fallen down the pecking order at an alarming rate at Arsenal under Emery, despite being the club's best-paid player, and has featured sporadically in the Premier League.

He was hoping to get some minutes under his belt in the Europa League this Thursday, but wasn't even named on the bench at the Emirates.

Ahead of the game, Robin van Persie said of the Ozil situation on BT Sport: "It's a shame, he's one of their best players.

"He's really good but something is not quite right at the moment with him and the coach so hopefully that gets solved for Arsenal.

Martin Keown added: "There is no doubt about his ability, it's the work ethic, it must be. Can he find a why to play him?

"I don't think he's as committed as I would like to see him, and I think there is evidence, there is hard evidence."

Photos: Fans line-up at KICC to take a snap with World Cup trophy