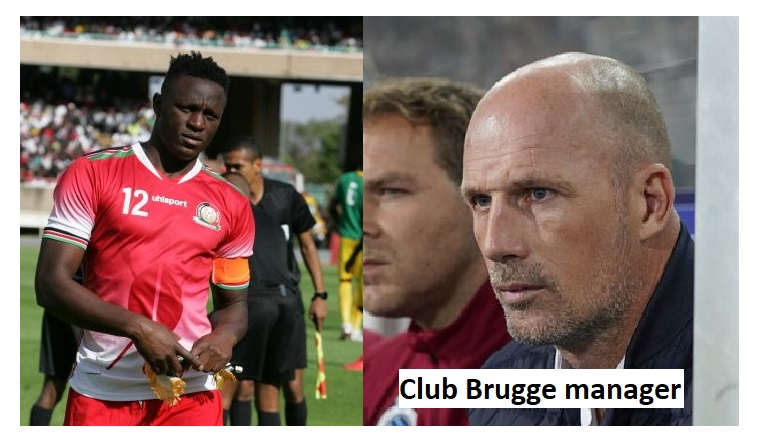 Wanyama is reportedly moving closer to completing a move over to Belgium, with the midfielder set to sign for Club Brugge before the end of the Belgian transfer window next week.

According to the Sun, Wanyama will only leave Tottenham Hotspur to join Club Brugge if the Belgian club qualify for the Champions League group stages.

Club Brugge are close to securing a spot in the group stages of the Champions League after they won the first leg of their play-off against Austrian side LASK Linz 1-0 last week, with the rematch at homecoming today at 10 pm.

Club Brugge had reportedly offered up £13.6million for Wanyama and will pay him about sh 8.2 million -per-week making him the highest-paid player in the club's history.

With the Belgian transfer deadline fast approaching, Club Brugge manager Philippe Clement has told journalists that he is trying to lure Victor Wanyama away from Spurs.

Speaking to reporters ahead of Uefa Champions League game against Austria’s LASK, Goal.com reports that Brugge manager said he wants to sign the Tottenham midfielder and will get another option if they fail to secure his services.

“[Wanyama] is a boy whose qualities we know well and the mentality,” Clement told reporters.

“But we don’t put all our eggs in one basket. For the rest, we remain alert on the transfer market.”

Daily Mail also reported that Bologna was also interested in the 28-year-old.

However, Spurs didn’t want the midfielder to leave on a loan deal.

The Kenyan has fallen down the pecking order at Tottenham due to the arrival of Tanguy Ndombele in the summer, and his injury record hasn’t been great either.

Wanyama started his professional career with Belgian side Germinal Beerschot AC in 2009 staying at the club for two years before moving on to Scotland giants Celtic for another two years.

He joined Spurs from Southampton in the summer of 2016 but has slipped down the pecking order and has yet to feature for the London club this season.

His career since he joined Spurs has been marred by bursts of nagging injuries, which have also kept the midfielder out of action in crucial parts of the season.