Kenyan fans took to social media to brag of Harambee Stars’ efforts in the ongoing Africa Cup of Nations tournament in Egypt. This comes after both Senegal and Algeria sailed through to 2019 final.

Harambee Stars had been pooled alongside Algeria and Senegal in Group C before bowing out of the tournament in the group stage, losing to both.

The advancement of both Algeria and Senegal to the final created a renewed sense of entitlement on social media from Kenyan fans, most boasting Harambee Stars ‘finished third’ since they were in the same group with the finalists.

The Lions of Teranga sealed a win 1-0 over the Carthage Eagles in the extra time at the 30 June Stadium to reach the AFCON final for the first time in 17 years.

Tunisian defender Dylan Bronn gifted Senegal an own goal in the extra time after goalkeeper Mouez Hassen pushed a free-kick against the head of Bronn and the defender headed into his own net.

Manchester City star Riyad Mahrez earned the Desert Foxes a final spot in the tournament by firing in a banger in the 94th minute through a stunning free-kick from the edge of the box to seal a 2-1 victory over the Super Eagles.

Mahrez’s strike confirmed Algeria’s first AFCON final since 1990 when they lifted their first and only Nations Cup trophy.

On Facebook, Kenyans gave Harambee Stars a round of applause for their great efforts in Group C, what they termed as a group of death.

Here are some of the Facebook comments seen by Game Yetu. 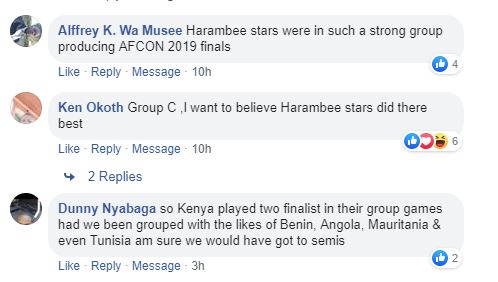 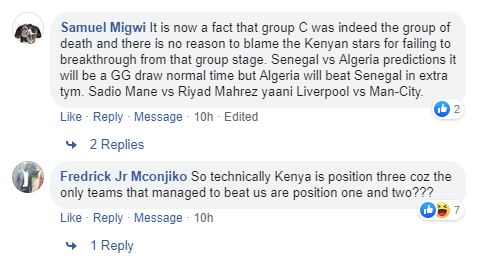