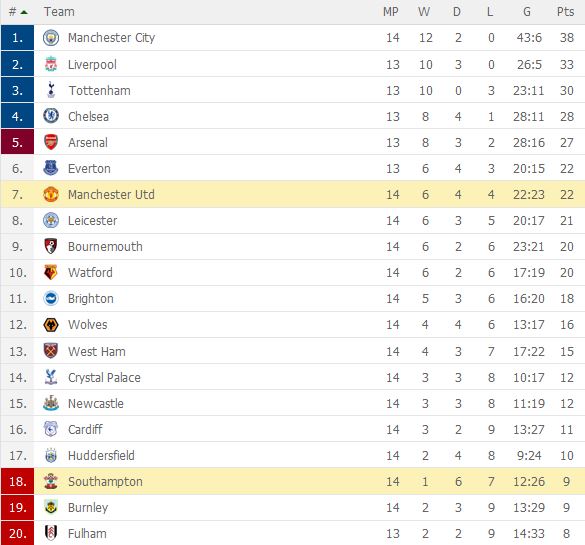 * Manchester United came from behind to draw 2-2 at Southampton

* Southampton remain winless at home in the Premier League

Manchester United came from two goals down to rescue a 2-2 draw at Southampton in the Premier League on Saturday as Jose Mourinho's side fell 16 points behind leaders Manchester City after 14 games.

United wasted a glorious early opening and were punished for their profligacy when Stuart Armstrong scored his third goal in a week to put Southampton ahead in the 13th minute, capitalising on suspect defending from the visitors.

A makeshift United defence, including young midfielder Scott McTominay, continued to look vulnerable and soon enough it was two, with Cedric Soares curling a sublime free kick into the net with 20 minutes on the clock.

No Premier League side has dropped more points from winning positions than Southampton this season, though, and United were back in it in the 33rd minute through Romelu Lukaku, who ended a run of 12 games without a goal for United in all competitions.

Six minutes later and Southampton were breached once again as Ander Herrera drew United level with a fine finish.

David de Gea was forced into a smart late save to preserve a point for United, who are now six points behind fourth-placed Chelsea having played a game more, while Southampton stayed in the bottom three and remained winless at home.

Manchester City made to work for 3-1 win over Bournemouth