Tottenham Hotspur midfielder Victor Wanyama has been awarded the Premier League goal of the month trophy for his stunning long-range strike in the 2-2 draw at Liverpool on February 4th.

Substitute Wanyama triggered a breathtaking end to Spurs' fixture with Liverpool, firing home a jaw-dropping half-volley into the top corner to draw the game level at 1-1.

Ogada was hoping for a draw but was not sure before a friend called him to inform him that the midfielder had scored.

“On my way home a friend of mine called and told me that, Wanyama had scored for Spurs, keeping alive my slip,” Ogada revealed last month.

Following the 2-2 draw, Wanyama said the goal was one of his best. 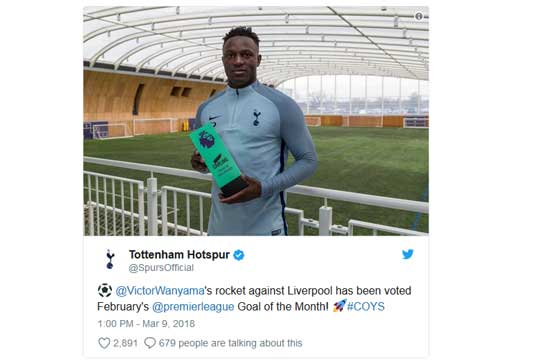 ? @VictorWanyama's rocket against Liverpool has been voted February's @premierleague Goal of the Month! ????#COYS pic.twitter.com/pXPYEuDj2p

Liverpool's Mo Salah was among seven other footballers who were nominated for the award.

Aden Range Marwa has reportedly been shortlisted among the match officials who will be on duty to officiate the 2018 FIFA World cup in Russia.