Celtic enjoys huge following in Kenya having given national team captain and Tottenham Hotspur midfielder, Victor Wanyama, his break into the lucrative English football when they signed him from Belgium’s Germinal Beerschot in 2011.

Kenya in particular has been the biggest beneficiary with Nairobi Soccer Academy, coached by former Harambee Stars midfielders, Titus and Simeon Mulama, being the latest recipients.

The kit donated by Celtic Foundation in conjunction with apparel manufacturers New Balance was presented in a colourful ceremony by Dafabet Business Development Manager Chris Harley on Sunday. 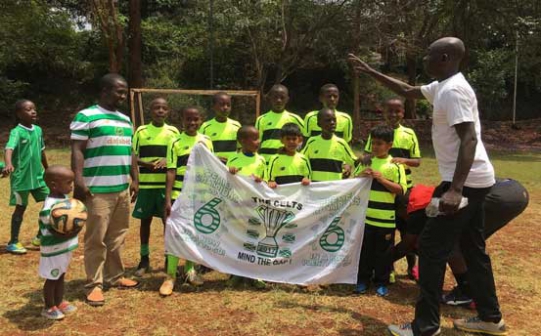 Simeon Mulama, who turned out for Mathare United and AFC Leopards praised Celtic Foundation’s efforts for its gesture saying it will motivate young players to pursue their dreams.

“We believe in soccer development and are so happy seeing key players in the sports scene coming to assist and ensure our kids are better equipped to conquer the world,” Mulama said.

Dafabet’s Harley, who spoke on behalf of the foundation and New Balance assured the parents of Nairobi Soccer Academy players of continued support from both the institutions.

“We intend to make sure that over 500 hundred junior teams benefit from this initiative from the first phase of this project which we are really grateful to Celtic foundation and New balance,” said Harley.

The presentation was preceded by a match between the parents of the academy players and Dafabet staff against Nairobi Soccer Academy team, which the later won 2-1.

Celtic Foundation has so far kitted 50 youth teams in Kibera, 12 junior teams in Kisii and six teams in Kayole through the facilitation of leading betting firm Dafabet which set shop in Kenya last year.

Eto’o denies having sponsored a plane to airlift returnees

Former Chelsea and Cameroon striker Samuel Eto’o has been linked to a report suggesting that he has sponsored a plane to ferry back the Cameroon nationals who were enslaved in India.

By Robert Abong'o and Odero Charles | 7 hours ago