Mata happy to play for Mourinho at United 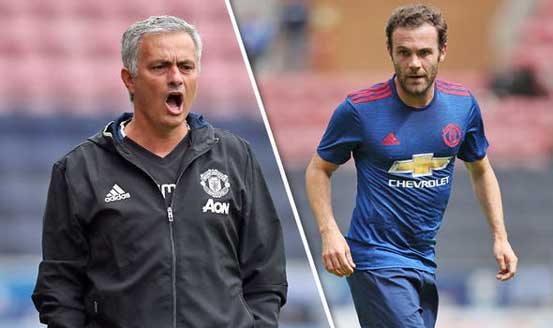 Manchester United ace Juan Mata insists he did NOT leave Chelsea because he had fallen out with Jose Mourinho.

Spain World Cup winner Mata surprisingly switched Mourinho's Blues for Old Trafford in January 2014 - after starting just 11 times out of 22 games in the first half of the season.

United, then managed by David Moyes, splashed £37.1m for Mata - after winning Player of the Year at Stamford Bridge the year before.

But Mata and Mourinho were reunited in the north west this season when the former Real Madrid gaffer took over from Louis van Gaal.

"You know, sometimes in life and football as well, changes comes. You have to embrace it," Mata told BBC’s Premier League Show.

"When Jose came along, I wasn't playing lots.

"I had the chance to go to another great club and it was a good offer for Chelsea as well."

When asked whether he had fallen out with Mourinho, Mata explained: "I think it was a football reason, style, something like this.

"But no, we didn't have a personal problem. We are working together now and it is fine."

Mata has scored nine times for the Red Devils this season and is very happy under Mourinho.

He said: "I think he understands what this club means.

"I think that's very important, to understand the history, the philosophy and what the fans are used to."

A Vietnamese goalkeeper has been banned for two years for leading an extraordinary mannequin-style protest when his team stood still and let in three late goals to complain about a disputed penalty.