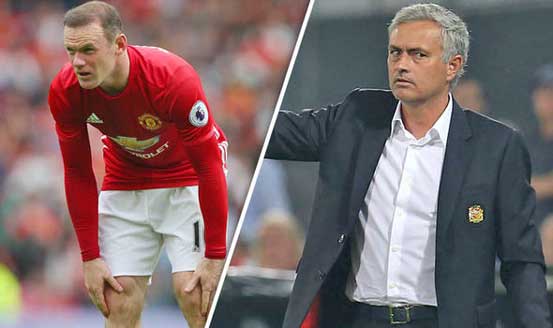 Jose Mourinho confirmed Wayne Rooney will be in Manchester United's League Cup Final squad against Southampton after the club's record goal scorer declared he will remain at Old Trafford for the rest of the season.

United manager Mourinho was impressed with the way England forward Rooney handled rumours of a possible lucrative move to the Chinese Super League.

And, after revealing that Henrikh Mkhitaryan will miss Sunday's Wembley showpiece due to an injury suffered at Saint Etienne in midweek, Mourinho opened the door for Rooney to play against Southampton.

"Yes," said Mourinho when asked on Friday if Rooney is in the Wembley squad. "I think he did, in the right moment, in the best moment, he did his declaration, his statement.

"I told you at my last press conference that the questions you are asking me were questions for him. Only he could answer the questions and he did it exactly in the right moment.

"Your question is the last question about Wayne Rooney and should be the last until the end of the season. He says he stays and helps the team to fight for the trophies.

"I said already I will be happy if that's the decision so yes it's fine. He is training with the team.

"He was not selected for St-Etienne because he was not ready to play, but he was ready to have one more important training session. And now, today, he is involved in the game."

Mourinho also spoke passionately about the extraordinary sacking of Leicester manager Claudio Ranieri, who left the club on Thursday less than a year after leading them to the title.

Mourinho posted a message of support on his Instagram account and arrived at the press conference wearing the initials 'CR' of his sacked colleague on his shirt.

"My comment about Claudio is my shirt with his name," he said. "It is my little homage to somebody that wrote the most beautiful history of the Premier League.

"Somebody that probably deserves the Leicester stadium to be named 'Claudio Ranieri' - and he is sacked.

"And now they are also in the highlights with the decision that I think has everyone in football united because it is something very, very difficult to accept.

"But I think at the same time it is good for us to realise how football is, and we need to adapt to it.

"I thought last season when I was sacked as a champion it was a giant negative thing, now I realise it was peanuts to what happened with Claudio.

"My Instagram and shirt were homage. I don't think he needs more homages because no-one can believe what he did.

"If some of the stories I am reading are true or are a little bit true, it's hard to find words to justify that. As managers we have to be ready to cope with that."

Mourinho confirmed he was referring to reports that Ranieri was dismissed due to player power and rifts in the Leicester dressing room, but the United manager has problems of his own to contend with after the Europa League draw.

United must face Russian side FC Rostov in the last 16, a draw which hands them a difficult journey just four days before facing Chelsea in the FA Cup quarter-final.

"It's a bad draw in every aspect," said Mourinho. It's far and comes in a very bad period for us, difficult because they're a very difficult team.

"They have a very good Champions League campaign, they beat Ajax and Anderlecht in playoffs and in the group phase, a difficult group with Bayern and Atletico, they managed good results against them."

Manchester United is the most popular club online in China but the Bundesliga's web presence far outstrips the English Premier League, a new study has shown.

By Robert Abong'o and Odero Charles | 2 hours ago