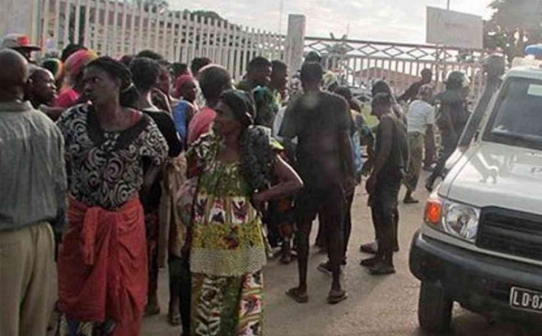 At least 17 football fans died in a stampede at a stadium in northern Angola on Friday, police said, adding that scores of other spectators were injured, many of them seriously.

Panic spread through the crowd at the match in the town of Uige between Santa Rita de Cassia and Recreativo de Libolo in Angola's domestic league season.

"There was a blockage at the entrance to the January 4 stadium... this obstruction caused multiple fatalities -- 17 deaths, and there are 56 injured in the hospital," police spokesman Orlando Bernardo told AFP.

He added that there were an unknown number of children among the dead, and that hospitals were treating those injured.

Police said hundreds of fans had tried to enter the already packed stadium to see the match, causing a crush that pushed some people to the ground.

Many of the dead were trampled to death or suffocated.

"While the players were on the field, outside fans were trying to get into the stadium and a gate probably gave way to the pressure of the crowd causing several people to fall who were literally trampled on by the crowd," said the Recreativo de Libolo club in a statement on its website.

"There are already 17 confirmed dead and at least 59 wounded... (this was) a tragedy without precedent in the history of Angolan football."

Some witnesses said many fans did not have tickets to the match, while other reports said that spectators inside the stadium were not aware of the stampede until it was over.

The Portuguese news agency Lusa reported that the president of the host team, Uige-based Santa Rita de Cassia, said the security forces were to blame for not properly controlling the crowd.

"There was serious police error in letting the people so close to the field," it quoted Pedro Nzolonzi as saying. "Many of them did not want to pay and those who had tickets could not get in. Then the confusion began," he said, according to the news agency.

"It is all the fault of the police. Ït was easy to avoid. They just need to extend the safety cordon."

The government had demanded an investigation into the cause of the disaster, the state-run Angop news agency reported.

Angola, ranked 148 in the FIFA world rankings, is a minor power in African football.

The country has been relatively closed to the outside world under the authoritarian President Jose Eduardo dos Santos who has ruled since 1979.

Football has a tragic history of stampedes and stadium deaths, often blamed on lack of crowd control, dangerous venues and spectator behaviour.

In 2009, poor crowd control in Abidjan caused 19 deaths before a 2010 World Cup qualifier between hosts Ivory Coast and Malawi.

A stampede at the Accra Sports Stadium in Ghana in 2001 resulted in 127 deaths.

In May 1964, 320 people were killed and more than 1,000 injured during a stampede at a Peru-Argentina match at Lima's National Stadium. Fans could not escape the crush and were trampled or asphyxiated.

Britain renovated its football grounds after 56 people died in a fire in a wooden stand in 1985 and 96 Liverpool supporters died in a crush during an FA Cup semi-final in 1989.

Due to the tough economic times, many Kenyans will not even want to think about Valentine's Day on Tuesday.

Man City fight back to draw at West Ham
Feedback