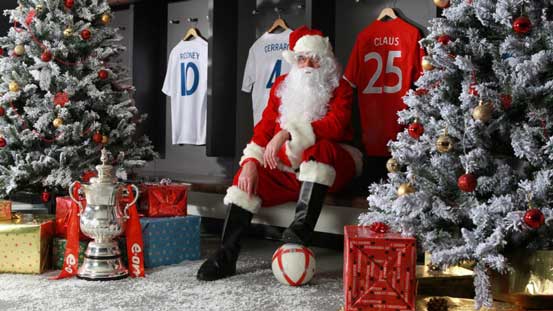 Irresistible Chelsea go into the Christmas round of fixtures knowing they can end the year by re-writing the record books.

Victory at home to Bournemouth on Boxing Day would be a club-record 12th league win in succession.

Another win over Stoke City at home on December 31 would mean the Blues equal the record for a single season of 13 set by Arsenal in 2001-02.

That side became known as “the Invincibles” after going through the entire 2003/04 season unbeaten and Antonio Conte’s team could start calling themselves “the Untouchables” if they take their winning run into the new year.

First, they face Bournemouth without the suspended Diego Costa and N’Golo Kante, two ever presents this season.

Costa is the Premier League’s top scorer with 13 goals, more than he managed in the whole of last season, while Kante has transferred the form that helped win Leicester City the title into the heart of Chelsea’s midfield.

Costa’s absence means that Michy Batshuayi is likely to make his first league start since his move from Olympique de Marseille.

Another Chelsea win would increase their lead over Liverpool, their closest pursuers who do not play until December 27 when they host Stoke City.

Bournemouth will be without loanee Nathan Ake

Liverpool manager Juergen Klopp must decide whether to start with Daniel Sturridge, the substitute whose shot led to Sadio Mane’s stoppage-time winner in Monday’s Merseyside derby against Everton.

Manchester City welcome back Fernandinho from suspension for their Boxing Day trip to bottom side Hull City, but will again be without forward Sergio Aguero.

Arsenal manager Arsene Wenger will be looking for an instant response to that setback and needs victory against West Bromwich Albion to ward off the usual doubts about his side lacking the physicality to mount a serious title challenge.

Alan Ruschel, a defender with Brazil's Chapecoense football club who miraculously survived the plane crash which wiped out most of the team last month, says a seat swap saved his life.