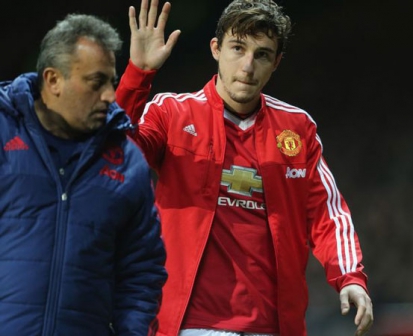 Louis van Gaal is sweating over Matteo Darmian after the defender was taken to hospital following Manchester United's defeat to Southampton.

The 26-year-old right-back was withdrawn during the second-half of the 1-0 defeat at Old Trafford after a sickening clash of heads with Saints striker Shane Long.

And Van Gaal will be keeping his fingers crossed that the injury to the Italian is not serious as he is already missing Luke Shaw, Ashley Young, Antonio Valencia, Phil Jones and Marcos Rojo.

The Dutchman said: "He's in hospital. He was spitting blood so we have to wait and see."

The former Torino man waved to fans as he made his way to the United dressing room and was replaced by Paddy McNair for the final half an hour at Old Trafford.

Van Gaal admitted that he would like to bring a full-back in before the end of the January transfer window, with Bruno Martins Indi and Ryan Bertrand among those who have been linked with a move to Old Trafford.

"Every change was a weakness in defence," added Van Gaal. "Our defence in set-plays was weaker because I changed Fellaini and had to change Darmian.

"That is a risk you take, it was a poor game and we didn’t create so much and neither did our opponent."

By Ochieng Oyugi | 25 minutes ago