Deontay Wilder’s trainer: Why Wilder’s outfit could be to blame for Tyson Fury loss

Last updated 5 months ago | By Mirror 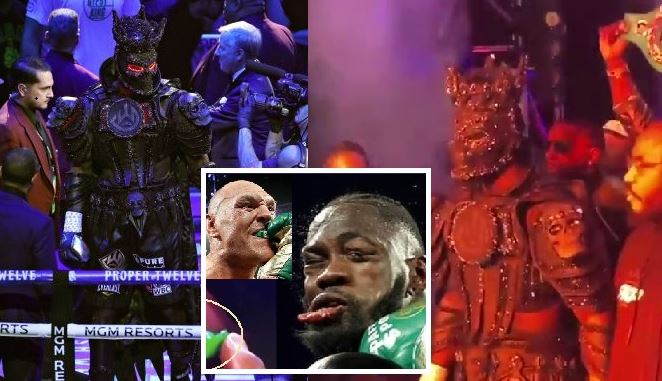 Deontay Wilder's trainer has claimed the deposed champion's ring walk outfit may have contributed to his defeat by Tyson Fury.

The American walked into the MGM Grand in Las Vegas in an extravagant costume which resembled battle armour from Game of Thrones.

It included a black mask, glowing red eyes in a crown as Wilder followed Fury to the ring.

The Brit himself had been carried into the arena on a throne which had cost $1,100 from Amazon.

Fury went on to drop Wilder in the third and fifth rounds before the towel came in during the seventh session to signal the changing of the guard.

And Wilder's head coach Jay Deas admitted his charge looked out of sorts from the first bell.

"His legs didn’t look great to me early on. I didn’t think his legs look like they normally look," he told Boxing Social. "I know he came to the ring in the outfit, which was very heavy.

"I don’t know if that had anything to do with it. Tyson’s a lot of weight to be putting on you as well.

"I don’t know all the answers yet but once I see the film, I’ll know more."

Wilder himself hinted that he was carrying an injury coming into the fight and that all was not well in his training camp.

He said: "I'm doing good. Things like this happen. The best man won on the night. My coach threw in the towel but I’m ready to go out on my shield.

"I had a lot of things go on coming into this fight but it is what it is. My leg was already weak coming in due to other things. But I make no excuses tonight.

"I just wish my corner would have let me go out on my shield, I’m a warrior. But he [Fury] did what he did and there’s no excuses."