Kenya’s Samuel Gathimba narrowly missed out on a podium place after finishing fourth in 1:19.25 in the men’s 20km race walk event which was held at 1am yesterday.

Gathimba who made history in March when he become the first Kenyan to medal at the World Athletics Race Walking Team Championships in Muscat, Oman when he finished third behind Japanese duo Toshikazu Yamanishi and Koki Ikeda was aiming to medal but narrowly lost the third place battle to Swedish’s Perseus Karlstrom.

The race was won by Japan’s Toshikazu Yamanishi who successfully defended his 2019 title after fighting off compatriot and Tokyo silver medallist Koki Ikeda over the final few kilometres to cross the line in 1:19:07.

Meanwhile, Conseslus Kipruto proved he still has a burst of speed as he led Kenyans Leonard Bett and Abraham Kibiwott into the men’s 3000m steeplechase finals set for tomorrow.

Running in heat two, the defending champion showed his intentions of claiming his crown when he sprinted full speed after the final barrier to clock 8:20.12 to finish second behind Ethiopia’s world silver medallist Lamecha Girma who returned 8:19.64. America’s Hillary Bor finished third in 8:20.18.

Bett and Kibiwott also sailed into the finals after finishing second and third timing 8:16.94 and 8:17.04 respectively in heat one that featured Olympic champion and world leader Soufiane El Bakkali of Morocco who won the heat in 8:16.65 with Ethiopia’s Getne Wale finishing fourth in 8:17.49.

At the bell, Getnet Wale and El Bakkali showed intent by pulling away from their opponents with Bett and Kibiwott in hot pursuit and managing to pass the Ethiopian after the water barrier to get two automatic qualification slots with El Bakkali emerging top.

Kigen, who also struggled during the trials and finished outside the top five but got lifeline when he was handed a chance by the selectors. He struggled after slipping in the final water hurdle.

In the 1,500m women heats, Olympic champion Faith Chepngetich led compatriot Winny Chebet into the semi-finals. Chepngetich won heat two in 4:04.53 while Chebet was second in heat three which was won by Ethiopia’s Gudaf Tsegay.

The semi-finals were set for this morning at 4:30am Kenyan time

Two other Kenyans Judith Kiyeng and Edinah Jebitok did not make the semi-finals. 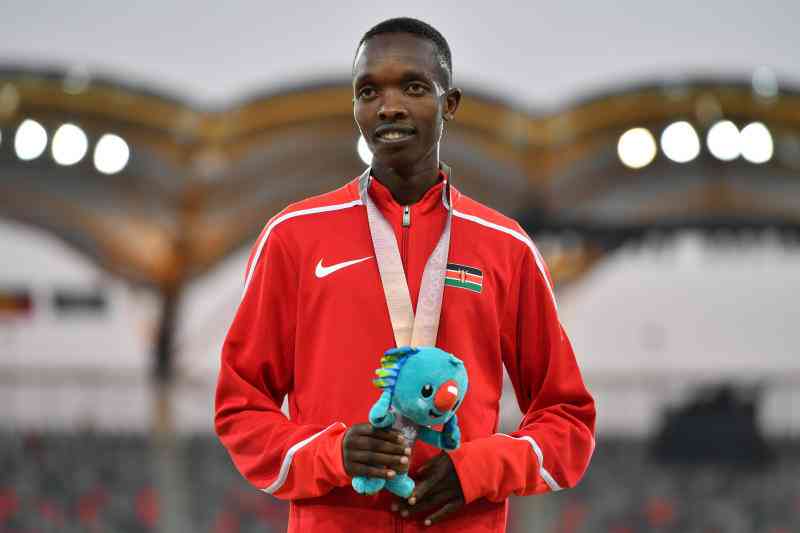