Mwasya eyeing medal in Eugene after racing to continental gold

Following her superb performance at the African Senior Athletics Championships last month in Mauritius, Jarinter Mwasya believes she can execute her races properly at the World Championships in Eugene and deliver a podium finish.

Born in Iuani, the mountainous region in Wote, Makueni County Mwasya is among the few female athletes to have run under two minutes this season and will lead Kenya’s charge over the 800m distance alongside Mary Moraa and Naomi Korir at the global showpiece set for July 15-24 in Eugene, Oregon.

The 25-year-old ran 1:59.84 in Toulouse, France in May before winning her first individual medal, gold at the Africa Championships. Her victory saw her land a shoe deal with Japanese multinational corporation sportswear ASICS.

Some of the top athletes who have run sub two minutes include Moraa, who is currently ranked third global over the distance, Briton Keely Hodgkinson, Americans Athing Mu, Kate Grace, Jamaican Natoya Goule among others.

At the surprising and exciting Kenyan trials, Moraa smashed her personal best, winning the 800m after clocking 1:57.45 to finish comfortably ahead of Olympic 1500m champion Faith Kipyegon (1:58.18) with the newly crowned African champion Jarinter Mwasya finishing third in 2:00.36.

“Things are looking good for me this season, and I believe the best is yet to come, making my debut at the world championships is a great achievement for me, and this comes just weeks after winning continental gold medal in 800m,” said Mwasya who is coached by Peter Bii in Iten.

“Its good that other sporting brands are interested in Kenyan market, it gives athletics an alternative to choose which brands to work with, ASICS came in at the right time and I’m sure many athletes will be embracing it,” she said.

Mwasya who joined Kenya Defence Forces in 2015 picked up running while still a student at Nthukula Secondary School in Wote where she sat for her Kenya Certificate of Secondary Education in 2013.

“I developed interest in athletics while in primary school, but took it seriously in secondary school, and in 2013 I won my first medal over 800m at East Africa School Games in Lira, Uganda. It’s been a work in progress and my hope is execute my races well and get a podium place in Oregon,” Mwasya said.

She also won team bronze medal at the 2019 World Cross Country Championships in Aarhus, Denmark in the mixed relays apart from winning gold in 800m.

Mwasywa will also be competing at the Commonwealth Games slated for July 28 to August 8, 2022.

“It’s a quite busy season, but we are glad we are competing again after coronavirus halted competition in 2020 and part of the 2021 season,” Mwasya said.

“Jarinter works so hard in training and her level of discipline is high so I wasn’t surprised with her performance this season,” Bii said. 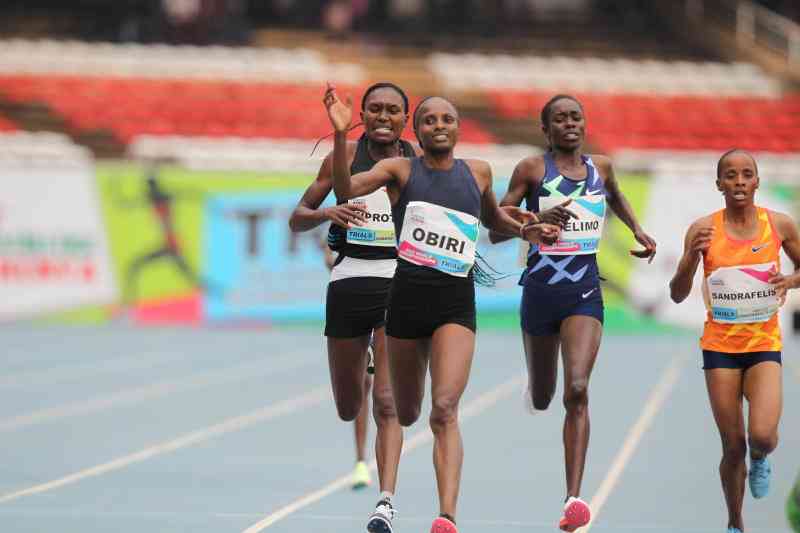